This page lists all the weapons, devices, and vehicles used by the Ninja Rangers. Below is the inventory, which also reflects on the Super Ninja Steel series page as well as the team page of the Ninja Rangers.

Claw Mode
Add a photo to this gallery

Gold Ninja Battle Morpher is the personal morphing device of Ninja Steel Gold. It has a blaster mode where it becomes a small energy pistol capable of destroying concrete.

Lion Fire Mode
Add a photo to this gallery

The Superstar Blade[2] is a powerful weapon, a much stronger Ninja Star Blade, built by Sarah, and finished with Mick's help. The blade's "Superstar energies" are balanced to matchup with the Rangers' Ninja Star Blades so the blade can interact with all of their Ninja Stars. By aligning the user's energy, the weapon empowers them and enables them to unleash extremely powerful attacks, with or without Ninja Stars.

Additionally, through the use of the Superstar Mode Star, Ninja Steel Gold can powerup into Superstar Mode, making him even more of a formidable fighter than before. The mode only works for him as the star utilizes his Gold Energy.

Originally used to interface with the Galaxy Warriors dome ship to provide in-ship information and assess battles, the Datacom also has independent communication capabilities. Mick is able to repair his after being damaged on his fall to Earth. The Datacom is designed after the Ninja Power Stars, which Galvanax had in his possession at the time. While closed, the Datacom can communicate with the ship computer or anyone else with a Datacom. Open, it can facilitate video chat. 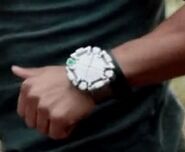 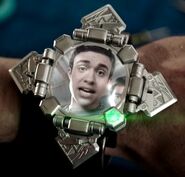 The Ninjacom is the Ninja Steel Rangers' primary method of communication. With the device, the Rangers are able to contact with each other electronically. At the end of the third episode, Mick and Brody crafted the Ninjacoms for the Ninja Steel Power Rangers to use. Live and Learn

The Rockstorm Guitar is the personal weapon of Ninja Steel Gold, in which it combines three types of equipment into a single weapon.

The weapon itself has two modes in which to launch attacks, greatly maximizing the range of attacks that the weapon can utilize to deal with enemies and monsters alike due to how easy it is to switch modes, which is a simple switching of the grip. It also strums like an actual electric guitar.

The signature attack of this weapon is the Rockstorm Blast which requires no Power Stars to operate. This attack usually manifests as a bolt of golden lightning firing from the tip although it can also manifest as mere energy balls such as when he fought Basherbots in the episode "Rocking and Rolling."

To utilise attacks, the dual-element Storm Star is placed right in the soundhole compartment of the weapon before strumming it to activate their corresponding attacks.

The main finishing attack with this weapon is the Storm Star; Tornado Slashes Final Attack where Levi inserts his personal Element Star, switches it to Tornado Mode, and swings the Rockstorm Guitar around in one direction, surrounding himself with a golden tornado. He would then zoom towards the monster and slash them multiple times with golden energy, finishing them off with an energy slash right through the middle. He would then typically take a selfie and the monster would be destroyed.

The Ninja Star Blade is the main sidearm for the main five Ninja Steel Rangers.

When the blue button marked with the kanji for "Technique" (技, Waza) is pressed and one of the main Ninja Power Stars is spun in the Ninja Star Blade, it activates a finisher attack:

Ninja Blaster
(Finisher Mode)
Add a photo to this gallery

The Ninja Super Steel Blaster is a pump action blaster resembling an ancient Chinese firework rocket weapon with a similar design to the Ninja Master Blade and modeled partially after the Lion Fire Zord. It accompanies the Ninja Super Steel Mode. It's primarily used to initiate a Megazord's final attack. The blaster was also used by Devon in Beast Morphers Season 2 Evox Unleashed, showing that it could be used outside a Megazord cockpit and actually function as a cannon.

The Transportal Device is a device created by Time Force in order to travel to different dimensions.