The Delta Morphers of B-Squad. This device contains 5 functions, separated by 3 different tabs:

The Patrol Morpher is Commander Cruger's Morpher which allows him to become the Shadow Ranger. This Morpher looks exactly the same as the Delta Morphers and has the same functions, but is colored black with yellow stripe areas replacing the Delta Morpher's white stripes. It, however, does not seem to enable Commander Cruger access to S.W.A.T. Mode.

The Omega Morpher is the Omega Ranger's Morpher. The Morpher was also capable of using attack modes:

The Morpher also has a Judgement Scanner that grants Omega Ranger the ability to Judgement and use Containment Mode to detain alien suspects.

The Magna Morpher was designed by Kat Manx to serve as the Red Ranger's Battlizer Morpher to summon the S.P.D. Battlizer. This Morpher is based off of the design and technology of the Omega Morpher. Red Ranger summons RIC so that RIC may launch the Morpher to him.

The Kat Morpher is the S.P.D. Kat Ranger's Morpher. Kat Manx only used it once; it had a time limit of 1 hour. It is designed similar in shape to the Delta and Shadow Morphers.

R.I.C. (Robotic Interactive Canine) 2.0 is a robotic dog with multiple special features. R.I.C. was scheduled for retirement before being severely damaged while on a mission with Sydney. In an effort to prevent R.I.C. from being discarded, Sydney turns to Bridge for help. With assistance from Boom, he re-invents R.I.C., dubbing him "R.I.C. 2.0". In his upgraded form, R.I.C is able to transform into a weapon for the Rangers called the Canine Cannon when the bone-shaped key is placed in his mouth. R.I.C. was later upgraded to be used in the Red Ranger's Battlizer system, forming the Battlizer's Sonic Mode armor.

The Canine Cannon is R.I.C.'s two-barrel cannon form that fires a powerful energy blast to take down and imprison criminals in the containment cards instantly.

When Boom cheated on his parents saying he was the Orange Ranger, at some point he made a modification to R.I.C. to become a motorcycle to help Bridge, Z and Syd against the Blue-Head Krybots.

The Deltamax Strikers are highly versatile weapons that can be used for both short and long range attacks. This common weapon resides at the side and inside its holster when in laser mode. Each ranger (except Red) have a Deltamax Knuckle, while their "blades" vary in size.

The Red Ranger is equipped with a variation of a Deltamax Striker while in his Battlizer's Cyber Mode.

Once combined, they form the Delta Blaster Combo Mode, which resembles the design of Delta Runner 1. The Red Ranger can fire a highly concentrated blast which has enough power to confine or, in the case of expendible enimies such as Krybots, destroy the enemy.

The S.P.D. Battlizer is used by Jack Landors (S.P.D. B-Squad Red Ranger), and once by Sky Tate. In Reflection, Kat Manx completed the technology in R.I.C.'s system. The Battlizer has two modes, a regular one used for ground-based light-weight combat, and one using R.I.C.'s body that also is used for the finishing move that grants the Battlizer's user flying power. Jack originally tested it out in Part One and succeeded by destroying Slate's split apart impersonations of several detained villains and imprison Slate. In Part Two, Jack lets Sky use it to avenge his father by defeating Mirloc. 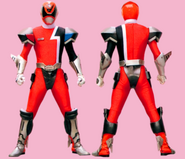 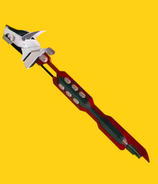 S.W.A.T. (Special Weapons And Tactics) Mode was created by Dr. Manx for B-Squad to give them extra power only if the team can work together. It was first used in S.W.A.T. Part 2 to battle Stench and Thresher, who stole S.P.D.'s top-secret technology.

S.W.A.T. Mode includes vests with Morpher holders, body and leg armor and head-equipped sensors and communicators. It has many other valuable functions, including night and thermal visions. The Rangers summon this gear via their Morphers ("S.P.D., S.W.A.T. Mode!" is the call). They are also equipped with Delta Enforcers. This mode is based on the S.W.A.T. team in actual law enforcement agencies. S.W.A.T. Mode seems to be equivalent of the A-Squad's standard gear. Unlike with the Lights of Orion, the main five S.P.D Rangers do not all need to be present to use it.

The Delta Enforcer is the standard laser-firing weapon of the B-Squad Rangers' S.W.A.T. Mode.

The Enforcer comes with three cards, each with a different purpose. To activate each one at a time, the user must open the hatch on top of the blaster via pulling a special tab built onto the Enforcer's back, which reveals a card holder. Then, they must slide the card on the side of the Enforcer to reveal a special flip-out card slot hidden under the hatch and load the card into the Enforcer. This blaster was also used by Ravi in Beast Morphers Season 2 Evox Unleashed.

The Delta ATV (All Terrain Vehicle) is the Shadow Ranger's personal vehicle. It is equipped with powerful blasters. The ATV was created by Kat when Cruger was relieved of his status as Commander by S.P.D.'s Supreme Commander.

The Uniforce Cycle is the Omega Ranger's personal vehicle. He uses it to patrol the streets near Space Patrol Delta and return to the base. It is designed as only having one single wheel as its name indicates ("uni" is the prefix term for "one").

The S.W.A.T. Truck is an armored truck used by the B-Squad Rangers Rangers. It can be driven from the front or the top. During the final battle with the Troobian Empire, Sergeant Silverback arrives with another one.