The Samuraizers are the Ranger's morphers and also devices to channel symbol power. 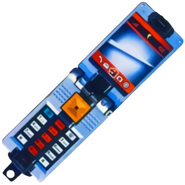 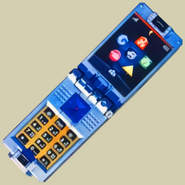 Gold Samuraizer
Add a photo to this gallery

The Spin Sword is the Rangers' sole sidearm which morphs into multiple functional weapon forms. It can transform into 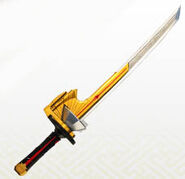 Super Mega Blade
Add a photo to this gallery

The Barracuda Blade is the Gold Ranger's personal weapon, a Tantō that he uses in his high speed slash attacks. The Barracuda Blade its capable of being used for the Sheath Slash technique, which is impossible. His final strike is the Barracuda Bite, which slashes the Nighlok enemy multiple times with energy strikes.

The Barracuda Blade is sheathed and kept away when Gold Ranger is in Mega Mode.

A Power Disc is taken from the Samurai Ranger’s Disc Buckle and is attached to the hilt of the Spin Sword to power it up with their signature attacks or summon their Samurai weapons.

The Disc Buckle generates whatever Power Disc is needed for any particular purpose. It doesn't appear to store all the discs at once but provides them one at a time that the one samurai ranger wants. The design resembles a portable CD player, except attached to a belt strip.

The Samurai Rangers utilize an SUV for long distance travel. It is a modified Cadillac Escalade with the Shiba House emblem on its door. Kevin once used it to go catch the Swordfish Zord. It was also used in Origins: Part 1 to go pick Mia up from the Orphanage where she worked. It's unknown if it was Ji who drove it or if it drives itself, or both.

The rangers can use their symbol power to summon theses horses to ride in battle. Red Ranger's horse first appeared in Origins Part 1 and the rest of them appeared in Clash of the Red Rangers - The Movie. Whether or not Antonio has one is unknown.

The Samurai Power Charger was a wrist weapon created by Antonio, designed to briefly paralyse the Nighloks. Samurai Power