This page lists all the weapons, devices, and vehicles used by the Ohrangers. Below is the inventory, which also reflects on the Ohranger series page as well as the team page of the Ohrangers.

The two-part Power Braces are the Ohrangers' transformation devices.

KingRanger's own personal variant of the Power Brace.

The powered suits of the five core Ohrangers, developed by UAOH's science and technology department using information derived from ancient records of the King Suit. OH is an abbreviation of Overtech Hardware and is also the Japanese word for "king". They are designed to increase the physical capabilities of their wearer by using the Storage Crystal in the right Power Brace to draw on the Super Power of the Ancient Civilization. The suits are made of a special cermet fiber which makes them resistant to cold, heat and pressure. However, equipping the suit puts a tremendous strain on the wearer's body thus transformation is used only when absolutely necessary. When not in use, the OH suits are stored within the left Power Brace.

Their joined team attacks is the Chouriki Dynamite Attack where the five core Ohrangers initiate their own version of OhBlue's Crashing: Rolling Bomber while silhouettes of their respective mechs appear behind them. They then unite into a white ball that plows through their foe, destroying him/her/it.

All six Gokaigers perform the Chouriki Dynamite Attack when they Gokai Change into the Ohrangers.

TV STORY-Ep. 22: Promise from the Star

KingRanger's suit. Created by an ancient civilization, it was made of a special metal fiber called Kaiser Metal (カイザーメタル, Kaizā Metaru). It's functionally similar to the OH Suits, but with a greater output of power.

The Ohranger's individual weapons manifested from their visors the same way their suits do. When initiating special attacks, a silhouette of their mecha motifs appears behind them as their weapons charge with their respective color as energy. 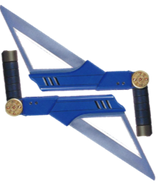 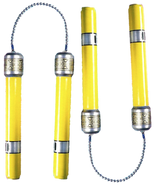 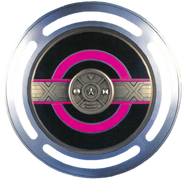 Big Bang Buster (ビッグバンバスター, Biggu Ban Basutā): A special combination of the main five Ohrangers' weapons and a King Smasher. The weapon is used to finish off normal-sized Machine Beasts and can even destroy a weakened enlarged Machine beast. 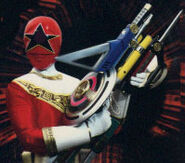 King Stick (キングスティック, Kingu Sutikku), a mighty scepter wielded by KingRanger, given to Riki by Dorin upon their arrival on Earth. While it can be used as a blunt weapon, its middle portion can slide down its length to create a bladed edge. Its special attacks are the King Victory Flash golden bullet flurry and King Tornado, where he releases a gold mist whilst spinning that seems to attack foes.

Jetter Machines: Five motorcycles that serve as the Ohrangers' personal transportation. Can be stored into the Thunderwings until they are needed.