Ninja Sword Gold Mode
Add a photo to this gallery

By placing the Sonic Fin in the Back, the Lion Hammer in the middle and the Hawk Blaster in front, the finisher is a fire a ball of energy which bursts upon contact with its target. This Mode is the one used most by the Wind Rangers.

By placing the Lion Hammer in the Back, the Hawk Blaster in the middle and the Sonic Fin in front, the finisher is a blue sound wave bubble that engulfs its target, lifting them up into the air where it explodes. This mode was only used once by the Wind Rangers.

The sword of the Green Samurai Ranger has a sheath that makes it look like a baseball bat and a computerized handle which is patched into the computers at Ninja Ops. It can also amplify Cam's voice.

A special weapon given to Blake by the Thunder Academy Sensei. He spent time training with it under the guidance of a Thunder Academy graduate before revealing it in battle.

Battlizer Flight Mode
Add a photo to this gallery 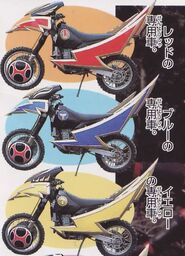 Thunder Rangers' Tsunami Cycles.
Add a photo to this gallery