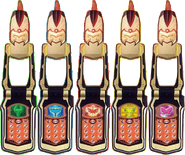 The Mystic Morphers
Add a photo to this gallery

The Fierce Dragon Morpher is what allows Nick Russell (the Red Mystic Ranger) to fuse with Fire Heart to become the Red Dragon Fire Ranger. It looks exactly like the Solar Cell Morpher, but is red and has a dragon head blade. Once he's on top of Fire Heart, he can morph by pulling on the handle. This allows Fire Heart to fuse with him.

The Wolf Morpher is the morpher used by Leanbow to turn into the Wolf Warrior.

After Koragg gave his Magical Powers to Imperious, it was then turned into the Dark Morpher. Imperious gave this to Necrolai. With this Dark Morpher, while it was not actually used as a morpher, Necrolai could still use it to fire Dark Magical Blast and cast Dark Spells.

However, after a short time, Koragg took back the morpher, returned it to the form of his Dark Magical Powers and regained his Dark Magic. 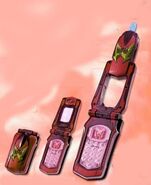 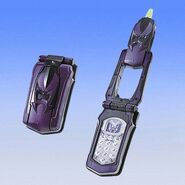 Dark Wand variation
Add a photo to this gallery

The Snow Staff is the White Ranger's own variant Magi Staff, and her personal weapon when she has morphed. It resembles the Red Ranger's Sword in length, but its "blade" is not used as such. It is capable of releasing blasts of wind cold enough to freeze an opponent in place and of firing energy blasts. When Korrag defeated Udonna in battle, he stole the Snow Staff and took it to the Pit where he kept it as his trophy. Koragg once used the Staff to somehow contact Nick by way of magical telepathy, creating a two-way telepathic connection which they can both use without the Snow Staff. When Udonna was captured and held captive in the Underworld, she was able to channel herself in Ranger form through the Snow Staff and assist the other Rangers in defeating Morticon. It was stolen from Necrolai by Leelee, who returned it to Clare in order to save Udonna, allowing Udonna to once again become the White Mystic Ranger.

A Magi Staff is a compact staff carried by each of the five Rangers, with multiple functions.

The Mystic Force Fighters were first used by the Green Mystic Ranger, after he learned that a person's heart is what really matters, and not what is outside. He was then given the Spell Code 0-8-6 to summon the Mystic Force Fighters. The Fighters are powerful magic boxing gloves that enhance the Ranger's speed and agility. They are a great weapon in battle and are capable of decimating evil undead forces. Any of the Mystic Force Rangers can use them, although Madison and Vida were never shown using theirs. He later used them again for a brief period of time in PROO's Once A Ranger when beating the fearcats. 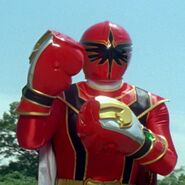 The Laser Lamp is the weapon of the Solaris Knight and also houses Jenji. It can fire laser blasts or can fire Jenji out as an attack called the Jenji Shinning Attack.

After learning his lesson, Xander received a new spell code where he gained exaggerated muscles, called Mystic Muscles, with which he was able to defeat Behemoth easily. According to Super Sentai continuity that the Green Mystic Ranger could access an upgraded form of the Mystic Muscles while in Legend Mode called the Rock Armor, the footage for this upgrade was never used in Power Rangers, mainly because of the gun shooting references in the original, as the Rock Armor was used to block sniper fire. Had the footage been used, the sniper fire would've been edited to look like laser beams, similar to the separated Delta Blasters in Power Rangers SPD, the High Octane Megazord with Wolf Cruiser in Power Rangers RPM, or the Magnuvisor in Kamen Rider Dragon Knight.

The Tribunal of Magic granted the Rangers the power of the Mystic Force Legend Warriors, after the Rangers had learned not to take the easy way in battle.

The Legend Armor increases the Ranger's Magical Powers, as well as supplying them with powerful battle armor. To access the Legend Powers, the Rangers use the activation cry, "Legendary Source, Mystic Force!" and the spell code "Galwit - Mysto - Nermax" on their Mystic Morphers.

In Legend Mode, the Rangers have access to the Mystic Lion Staffs, and they can also form the Mystic Firebird and Mystic Lion Zords, which further combine into the Manticore Megazord.

When the Rangers are in their Legend Armor, they have access to these Staffs. The Staffs give the Rangers a new arsenal of Mystic spells, through a code system they use similar to a 1910s rotary phone dial. When the Rangers activate Code 1 on their Staffs, they use these powers:

Code 2 activates the full power of the combined Mystic Lion Staffs. Using the cry of "Legend Warriors, United Formation!" they are able to either incapacitate or destroy their target. The Mystic Legend Armor can be equal to Super Dino Mode in Power Rangers Dino Thunder.

The Mystic Lion Staff is the weapon the rangers gain when they are in their Legend Warrior mode. Instead of using their phones, they use the Lion Staffs, which used five codes. Each ranger gets one. Since each code does something different, here is what each one does:

During Light Source: Part 1, Chip was shown turning his Lion Staff into a crossbow mode, similar to his Magi Staff. It is presumed that the other rangers can do the same with theirs. 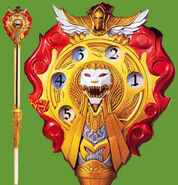 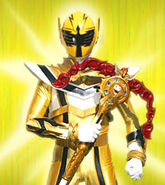 Crossbow Mode
Add a photo to this gallery

Ancient Mystic Mode is a magical armored mode used by warriors from the time of the Great Battle. It enhances the user's speed, strength, resistance to injury and spells, and at least in the case of Daggeron, it is quite stronger than a Ranger form.

It is activated with the command, "Ancient Mystic Mode!" but characters have been shown to summon it without a command on a few occasions.The standard Rangers' Ancient Mystic Mode might be the transparent forms seen during their morphing, but they were never taught how to use them.

Daggeron (and Calindor at one time) sometimes wields a golden sword in battle called the Mystic Sword. Leanbow also appears to have his own Mystic Sword while in his Ancient Mystic Mode; however, his sword is crimson colored and has jagged edges.

The Red Dragon Fire Ranger is the Battlized form of Nick Russell, the Red Mystic Ranger/Legend Warrior. In The Hunter, when Nick was facing Oculous to get his friends back, Fire Heart came to his aid, and the two merged together.

The Knight Saber is Koragg's sword which seems to be nothing more than a basic sword, with enhanced durability. The Saber was destroyed once in battle by Nick Russell, who charged Koragg with extreme magical power. After the death of Morticon, Koragg takes his sword. Using his dark magic, he reforms it into a new Knight Saber. When not in use, the sword is stored inside the Wolf Shield. When Leanbow becomes the Wolf Warrior, his sword changes from purple to red; the first Knight Saber appears to have been this color originally and was wielded by Leanbow prior to his becoming Koragg.

Wolf Warrior's Saber
Add a photo to this gallery

Shield of Darkness/Shield of Light

The Shield of Darkness is what Koragg uses to cast his offensive spells. Along with being a durable shield, the Shield opens to reveal the left eye of Octomus the Master, it is a major component of the Centaurus Wolf Megazord. After Leanbow returns, the shield is red. However, it is never seen open. Presumably, it no longer has the Master's eye.

Wolf Warrior's Shield, Shield of Light
Add a photo to this gallery

The Gatekeeper Staff is the weapon of the Gatekeepers: Niella & Clare. It is used when fighting.

Abilities of the Gatekeeper Staff:

The Xenotome is a book which holds in it everything that is not yet known. As the events unfold, the tome will have them appear inside its pages, written in the language of the ancients. Udonna and Clare uses this book to help battle evil.

The Mystic Racers are the Rangers primary vehicles. At first they are normal Mystic Brooms, but when the Rangers use the spell, "Galwit - Mysto - Aerotan", the Brooms change into Mystic Racers. The Racers are capable of incredible speed and allow the Rangers expedient passage to almost anywhere.

After realizing the error of his ways about how Madison expresses herself, Nick gained the spell code 1 - 2 - 4 "Galwit - Mysto - Motro", thus allowing him to morph his Mystic Racer into the Mystic Speeder. This cycle is perfect for the Red Ranger in battle. It's extremely fast and versatile. Plus, it has a missile that can be launched from the tip, and laser firing capabilities.

The Mystic Carpet is an enchanted carpet that serves as the Solaris Knight's personal transport.