The Power Coins are the source of each Ranger's powers. They could manifest the Power Crystals as well.

Small Sticks that could turn into small swords or ray guns, used as the Ranger's sidearms. Only killed one monster (Weldo), but also destroyed Billy's evil copy in Blue Ranger Gone Bad. Despite the lasers packing a punch, Tommy was able to use his Dragon Dagger to power up his Dragon Shield and deflect its fire. Interestingly enough, Tommy was given one as a replacement for his stolen Dragon Dagger, including a white holster, presumably given to him while endowed with Zordon's power, although he never used it.

TV STORY-Return of an Old Friend

The Blade Blasters were still in use even after being given new Ninja Power Coins by Ninjor; however, only the blaster function is used.

The Blade Blaster, ready to fire, as held by Trini Kwan.

The Red Ranger firing upon the Green Ranger.

To defeat Rita's Super Putties, the Rangers needed these powerful blasters that were guarded by Titanus the Carrierzord. Jason and Tommy were sent by Zordon to retrieve five super-weapons, located somewhere in the California desert. The mission depended more on the cooperation between Tommy and Jason, rather than the success of the retrieval. After learning to work together to defeat Titanus, they finally found the new weapons, the Thunder Slingers. They teleported to the others, and the core five destroyed the Putties.

These weapons were presumably placed in storage in the Command Center.

Every Power Weapon was first seen, used and combined to form the Power Blaster in episode 3, Teamwork.

This is the individual weapon of the Red Ranger and his successor. When used as part of the Power Blaster, it is placed on top of it, the blade pointing towards the barrel. Zordon stated that it is the key to all the weapons' powers. It is also the only weapon that does not have a second function. It can use a devastating slash of energy when the Red Ranger runs two of his fingers on his Sword and send it at his opponent. The sword was also wielded by Tommy during the "Thunder Slinger" mission. Jason does not give his weapon an alternate name as the others do in the episode Different Drum. 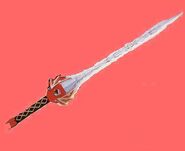 This is the personal weapon of the Black Ranger and his successor. It is a black, single-blade axe to be used for blunt damage. The base of the axe can be slid downward towards the base, converting into a cannon-like weapon that forms the main portion of the Power Blaster. Zack can also use it as a cannon on its own.

TV STORY-Itsy Bitsy Spider Zack once called his weapon the Cosmic Cannon in Different Drum. It is later used by Adam Park in Once a Ranger and Jake Holling in Samurai Surprise. 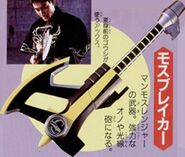 This is the personal weapon of the Blue Ranger. A double-bladed lance that is close in height to the Blue Ranger itself, it can split into a pair of trident-like sai blades, the size of escrima sticks. When used as a part of the Power Blaster, it forms two of the five laser barrels. It can also generate electricity. Billy once called his weapon the Mighty Mace in Different Drum.

This is the personal weapon of the Yellow Ranger and her successor. A twin pair of yellow short-bladed daggers, they are effective as both melee weapons and projectile weapons. When used as part of the Power Blaster, it forms two of the five laser barrels. The daggers can also generate an energy double slash. Trini once called her weapons the Dino Daggers in Different Drum.

This is the personal weapon of the Pink Ranger though her successor was never shown using it. It fires projectile pink arrows at enemies, something Kimberly often did from midair. The arrows themselves appeared to be explosive on impact, shown when Kimberly fought Spit Flower.

TV STORY-The Spit Flower When used as part of the power blaster, it crosses over the top of the Power Axe, forming a bar that holds the Power Daggers and Power Lance. It can be used as a melee weapon in the video game adaptation, similar to the Ptera Arrow weapon on which it is based, although Kimberly used her bow in this way as well on occasion. It can transform into a harp as well. Kimberly once called her weapon the Battle Bow in Different Drum.

Kim holding an arrow with her Bow

A powerful assemblage of all 5 of the core Rangers' Weapons: Red Power Sword, Black Power Axe, Blue Power Lance, Yellow Power Daggers, and Pink Power Bow. Used as a finisher on small monsters. Sometimes it wouldn't manage to destroy them before Rita or Zedd could make the monster grow.

It resembles a crossbow, and its two central pieces were the Power Bow and the Power Axe. The Power Blaster was formed by placing the Power Bow horizontally within the locking mechanism of the Power Axe in Cannon Mode, with the Power Dagger's and separated Power Lance Mace's connected to the length of the Bow, with their handles facing forward, acting as additional barrels to the cannon. The Power Sword, the key to the Blaster, was locked in on top of the cannon, similar to where an arrow would be placed in a crossbow. The Power Blaster was used by the first team of Rangers extensively and only once by the second team

TV STORY-Scavenger Hunt before switching to the Power Cannon.

Every weapon is separate but equal

All 5 Power Weapons combined as the Power Blaster

The Mutant Rangers version of the Power Blaster

The Dagger was eventually put into storage in the Command Center along with The Dragon Power until it was stolen by Billy while under the control of Rita and given to Goldar. After Tommy's powers were restored by Zordon he later reclaimed the dagger and kept it as his primary weapon until his powers were fully drained by Lord Zedd and coin and dagger disintegrated.

After Tommy's powers were restored to battle the Armada he once again had possession of the Dagger.

Tommy was the first to use this as it came with his Green Ranger powers, though he could temporarily transfer the shield to other Rangers when needed.[1] After Tommy lost his powers as the Green Ranger, he gave his coin to Jason, which gave him more power than before using the Dragon Shield, and enabled the Rangers to control the Dragonzord using the Dragon Dagger weapon. Tommy then got his powers back a short time later.

It was once again given to Tommy when he returned to the position of the Green Ranger. It was also used by Zack in the Season 1 finale episode, "An Oyster Stew" in which he also received the arm bands. After Tommy lost his Green Ranger powers, he obtained a similar shield when he received the White Ranger powers. It was last seen in the Dino Thunder episode "Fighting Spirit".

During the filming of additional shots for the American Mighty Morphin Power Rangers series, the original shield prop wasn't transferred overseas with the rest of the costume. A poor replica was utilized, making new and original sentai footage easily distinguishable (see Notes for more info).

TV STORY-Grumble Bee. Working as a kind of exterminator's gun, it fired foam all over Grumble Bee disrupting his sonic attacks and immobilizing him long enough to be defeated. It was only used once by the Blue Ranger, and it was never seen again. Before teleporting it to Billy, the blue prints for it could be seen in a book on the Command Center's control panel.

Billy with the Foam Gun

The RadBug ("Remote Activated Drivingzord for Basic Ultra Geomorphology"[2]) was a Volkswagen Beetle capable of flight, built by Billy Cranston. It was used primarily during the time the Rangers were battling the Green Ranger

TV STORY-Green with Evil, although it was built before then. It was used as Green Ranger had damaged their teleportation systems along with other Command Center functions. It can go from 0 to 3,000 mph in less than three seconds.

TV STORY-Big Sisters They used it after the Rangers had discovered that the teleportation and communication systems in the Command Center were temporarily down. The Rangers also used it to find Rita's minions, who had snatched a little girl named Maria and forced her to release the Power Eggs.

RadBug later made an appearance in the Papercutz comic By Bug... Betrayed, a retcon comic set in the original timeline, wherein it is revealed that Lord Zedd turned it into a monster that the Thunder Megazord and Tigerzord had to defeat.

The Battle Bikes[3]could be seen in the background while the four Rangers minus Kimberly fought Samurai Fan Man.

TV STORY-Calamity Kimberly Since the Rangers were not shown teleporting after they left the Command Center, it can be assumed they drove the Bikes to their location. It would be the only appearance of the Bikes so they were never shown in use on screen. They were based off the Tyrannosaurus, Triceratops and Mastodon Zords for the Red, Blue and Black Rangers respectively. The Blue and Black Battle Bikes had side cars for the Pink and Yellow Rangers.

As seen in MMPR