The following is a list of all the weapons and vehicles in the Lightspeed Rangers's arsenal.

There are three functions that are used by the Morpher. To morph, the Rangers must press the button on the top left of the four button keypad. The top right button on the keypad is used for summoning the Rangers' Rescuezords, Rail Rescues, or Omegazords to form a Megazord. The bottom left button is used to call an alert and the bottom right button cancels functions. Their morphing command is "Lightspeed Rescue!"

Ryan Mitchell uses the Titanium Morpher to morph into the Titanium Ranger. His morphing command is "Titanium Power!"

Each of these standard Ranger sidearms features a Baton Mode and a Blaster Mode. In addition, the handle can be detached and combined with either a V-Lancer or the Rescue Bird (with the separate components or for the Unilaser form). The Blaster Grips are also used for the Lightspeed Rangers to control their Zords.

The Rescue Bird was the combined set of weapons used by the Lightspeed Rangers. It launches from the top of the Train Bay and can fly to the Rangers on command. It can also be reconfigured into the Unilaser (which uses a Blaster Grip as the trigger) which can fire a powerful beam that can destroy demons. When separated, each weapon must be attached to a Blaster Grip (the visor schematics for the Rescue Bird gave different names for the components: the Claw Anchor, Build Discharger, Winger, Beak Driller, and Tail Injector. These may have been internal codenames).

The Rescue Bird in Bird form and Unilaser form.

As Titanium Ranger, Ryan wields the Titanium Laser, which has proven to be more powerful than even the Rescue Bird. It can transform into a battle axe, which is capable of absorbing and redirecting energy attacks.

The V-Lancer (Lance and Blaster Modes)

Weapons used by the Lightspeed Rangers. They have two modes: a blaster mode (with an attached Blaster Grip) and a lance mode. The V-Lancers were created by Ms. Fairweather to fight Ryan while he was on Diabolico's side. When used together, they create the Spectra Blast finishing attack. A boomerang can also be detached from the "V" portion of the weapon.

These gadgets materialize from the Rescue Morphers and are activated by a numeric keypad which serves to power up weapons and Zords, and used by Chad & Joel to summon the Mega Battle Armor.

It should be noted that in the episode "Trakeena's Revenge-part II", Carter was able to unleash an energized chop against Triskull without pressing any of the buttons. Also, much like the Battlizer Gauntlet, any energized punches and strikes rendered the Ranger immune to any attacks, including Triskull's immensely powerful lightning breath and Queen Bansheera's energy lasers.

The Thermo Blasters were created by Ms. Fairweather. They fire intense, concentrated blasts of heat, and can be powered up by attaching a Battle Booster to it and extending the barrel; a different mode is when the "booster" piece attached to the bottom of the handle is inserted into the space at the top where the Battle Booster goes. The Thermo Blasters were first used against the Freezard monster. There are five differently colored blasters, one for each Ranger. This blaster is also used by Zoey in Beast Morphers Season 2 Evox Unleashed.

Lightspeed Megabattles (sometimes called simply The ("Mighty") Megabattles) were created by Angela and Clark Fairweather; they were activated by dialing 8-6-1 on the Battle Booster. The Blue and Green Rangers possessed these implements; Green was equipped with a spinning buzzsaw, which could split to serve as a shield/deflector weapon while Blue was equipped with a large cannon that could shoot concentrated blasts of ice or water.

The Rescue Rover takes the Lightspeed Rangers from the Aquabase into battle.

The Lightspeed Cycles were created by Angela Fairweather after Vypra created a vehicle that ran circles around the rangers' Rescue Rover. Each Ranger had their own Lightspeed Cycle:

The Red Lightspeed Cycle has a detachable Rescue Speeder, which can be launched for high powered attacks.

Each of the primary team of rangers had one 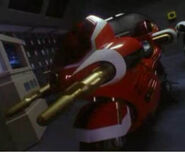 A one-man aircraft controlled by the Red Ranger. On its first day out, the MAV malfunctioned, causing Carter's day to repeat in a time loop. The MAV was ultimately sacrificed to destroy the rogue Omega Megazord, which had been taken over by Jinxer and a group of Batlings. In the toy version, the MAV could assume a humanoid-like form.

The Red Ranger's Batlizer, which appeared in the episode "Web War." The Trans-Armor Cycle was hard to handle at first for Carter because the system was still in the testing stages. But eventually, he was able to gain control of it and use it as his "Battlizer." The Trans-Armor Cycle comes in two modes: Cycle mode and Armor Mode, making it the first Battlizer that can also function as a vehicle.

The Trans-Armor Cycle was given to Carter Grayson, the Red Lightspeed Ranger, having received the key card to his new motorcycle, so he can rescue his friends. The armor also had a combined finisher used in conjunction with the Mega Battle armors.