The Kiramai Changer (キラメイチェンジャー, Kiramei Chenjā) is the transformation device of the main five Kiramagers. The Changer has four buttons as well as a rotatable band circling the faceplate:

The Shiny Breaker (シャイニーブレイカー, Shainī Bureikā) is the personal sidearm of Kiramai Silver, based on a jackhammer.[1] In Drill Mode (ドリルモード, Doriru Mōdo), Takamichi can use to generate seismic tremors by striking the ground. It can also be wielded as a gun or tonfa. In Hyper Arm Mode (ハイパーアームモード, Haipā Āmu Mōdo), Takamichi can use it to grapple opponents and throw them around[2]. The weapon serves as the handlebars for the control console of Mashin Drijan. It can be remote summoned by Takamichi from a distance or used to travel by holding onto the handles as it flies like a rocket.

Hyper Arm Mode
Add a photo to this gallery

The Kiramai Buster (キラメイバスター, Kiramei Basutā) is the combined form of the Kiramai Shot & Kiramai Sword, primarily used by Kiramai Red. Using the weapon's bayonet as a targeting arrow and the inherent charge power, the Kiramai Bullets fired are more powerful and accurate.

The finisher for this weapon is the Dazzling Kiramai Charge, where the Kiramager charges energy into the weapon's blade before firing a massive orange energy stream to piece through the opponent. This attack can destroy a Jamenshi and repel Jamen Beasts.

The Kiramai Shot (キラメイショット, Kiramei Shotto) is the primary firearm of the main five Kiramagers, primarily used by Kiramai Yellow and Pink. It is modeled after a toy disk gun and is made from Blue Diamond, like the Kiramai Sword. To finish an opponent, the user loads the weapon with the disc-like Kiramai Bullets (キラメイバレット, Kiramei Baretto) and pulls the handle above the grip, charging the bullets before firing them. The bullets also have the ability to ricochet off walls or obstacles to hit hard-to-reach targets. The weapon forms the main base of the Kiramai Buster.

Kiramai Bullet
Add a photo to this gallery

The Kiramai Sword (キラメイソード, Kiramei Sōdo) is the primary sword weapon of the main five Kiramagers, primarily used by Kiramai Green and Blue. Aside from offensive capabilities, it can generate crystals on its blade to form a fan-shape to be used as a shield. Like the Kiramai Shot, it is made from Blue Diamond. To finish an opponent, the hilt's button is pressed to charge the blade for devastating slashes. The weapon forms the bayonet blade of the Kiramai Buster.

Much like how Juru can change Blue Diamond with his thoughts, the Blue Diamond in the blade can be altered through heavy mental control. It can extend to hit far targets, or even extend in a way that there's a blind spot in the middle to miss a target's head or miss a hostage. The blade can even flex like a whip or grab something based on how it's wielder intends on using it. This move is known as the Kiramai Fishing, and is most commonly used by Kiramai Blue.

Aqua Kiramai Stone
Add a photo to this gallery

A special White Kiramai Stone (白いキラメイストーン, Shiroi Kiramei Sutōn) is kept at the CARAT base and is, in fact, a fragment of the crystal casing Mabushina arrived on Earth in. The fragment (along with the casing) later became Mashin Express. Episode 4: Princess of the Lost World

The giant Miracle Stone (ミラクルストーン, Mirakuru Sutōn) was a large fixture of Atamald that, when exposed to its shine, could cure any ailment. After the collapse of Crystalia, it lost this shine; however, after Oradin transfered his soul to the stone, it would shine again as the Sky Kiramai Stone (スカイキラメイストーン, Sukai Kiramei Sutōn).

Juru's personal sketchbook. With it, he can draw things and bring ideas to life.

4 Kiramagers Episode 1: The Mashin Are Born!

Kiramaizin Episode 3: You Fool! I Don't Need Your Help

Mashin Zabyun Episode 22: Are You Prepared? The Witch is There

King Express Zabyun Episode 22: Are You Prepared? The Witch is There 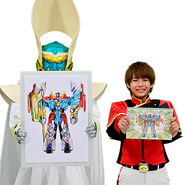 Phoenix and Jewels Episode 40: Aching Person
Add a photo to this gallery

Blue Diamond (ブルーダイヤ, Burūdaiya) is a special material made from Mabushina's tears. Some of it was used to make the Kiramagers' weapons. Like the Kiramai Stones, Blue Diamond is capable of responding to Juru and forming creations that spring from his imagination.

Substitute N (代役ン, Daiyaku N) is a doll made of Blue Diamond that takes the form of whoever touches its arm, most often used to take the place of a currently absent teammate in battle. Unlike its most recent predecessors in Sentai cloning weaponry - notably, the Futago Kyutama from Kyuranger, the GoodStriker Kaitou Boost from Lupinranger VS Patranger and the FueSoul from Ryusoulger - the clone is low-energy and unable to adopt either the full personality or skillset of the original Kiramager. For example, Shiguru's clone has even less enthusiasm in his voice than he does himself, and Sena was able to outrun her clone while being slightly more stoic. Both Tametomo and Juru have bumped it on the butt to revert it to doll form.

Substitute N is the first creation made by Juru that uses fresh Blue Diamond.

The Ice Bullet (アイスバレット, Aisu Baretto) is a special Kiramai Bullet manufactured by CARAT. It can be used to freeze enemies with the Kiramai Shot. The first Ice Bullet was created to face Marshmallow Jamen, as cold temperatures disable his body's elastic properties.