The Solar Morphers are sunglasses that allow the Jungle Fury Power Rangers to morph into their Ranger forms. The Solar Morphers are also used for communication between the Rangers and RJ. They feature audio and visual capabilities. The lenses appear exactly as they do in their Ranger forms' helmets. Apparently, villains can also directly contact rangers through these. With a morphing command, "Jungle Beast, Spirit Unleashed!"

The Wolf Morpher is the Wolf Ranger's morpher that, like the Lunar Caller, is modeled on a wolf's head. It is purple in color with a gold bell and hammer feature, and worn on the wrist but can be used like a cell phone, as shown when RJ was called by the other Rangers when talking to his father, Master Finn. RJ apparently constructed it at the same time as the Solar Morphers, but was reluctant to use it until the time was right. In battle it serves as RJ's weapon, able to fire spinning energized attacks called Wolf Beams. To morph, RJ opens the morpher, and with a call of "Jungle Beast! Spirit Unleashed!" rings the bell inside.

The Rhino Morpher is the Rhino Ranger's morpher that can also be used as a sword called the Rhino Blade. It has a standby mode, which is as a wooden clasp bracelet. It can also combine with any one of the Claw Boosters to form the Jungle Blade. 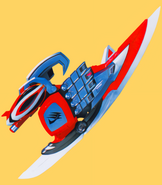 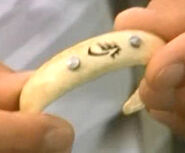 The Rhino Morpher in standby mode

The Junglechucks is Jungle Fury Red Ranger's main weapon. It can also harness his animal spirit energy. Theo, the Blue Ranger taught him how to use them in his first few training sessions as a ranger under RJ. It is radically different in design the other Jungle Rangers' main weapons, the Jungle Bo and Jungle Tonfa, more closely resembling Casey's Tiger animal spirit motif.

The Jungle Tonfa are Jungle Fury Blue Ranger's main weapons. They can also harness his animal spirit energy. Theo, the Blue Ranger learned how to use them in his second year at the Pai Zhuq academy. They can be transformed into a weapon identical to the Jungle Bo by turning the handles inward and attaching the tonfas together back-to-back, but Theo is not seen to use them in this manner in-show (similar to the Transdaggers being able to take on all five weapon modes, but each Ranger using his or her preferred mode almost exclusively).

The Jungle Bo is the Jungle Fury Yellow Ranger's main weapon. It can channel her animal spirit in electrical blasts aside from being a regular bo. It can be transformed into a weapon identical to the Jungle Tonfas by separating it and pulling out the handles, but Lily is not seen to use it in this manner in-show (similar to the Transdaggers being able to take on all five weapon modes, but each Ranger using his or her preferred mode almost exclusively).

The Jungle Mace is a elephant-themed single-headed meteor hammer-type weapon sought by the Jungle Fury Power Rangers to defeat the Pangolin. It belongs to Master Phant. Although hesitant at first, Lily got him to train her how to use it. He then entrusted it to her. It is later used by the Elephant Ranger. According to Rj, it has the power to break through steel.

The Jungle Fan is a bat-themed war fan weapon. Theo is taught how to use by Master Swoop. It employs a Bat fighting style. Either folded or fully opened, it can be used as both an offensive and defensive tool. It can be used solo or with a second Jungle Fan. It is later used by the Bat Ranger.

The Shark Sabers are pair of Master Finn's shark-themed Dao broadswords weapon, entrusted to Casey, the Jungle Fury Red Ranger. They are floppy swords that allow for flexible movement. When brought together, their density complements each other and forms a harder single sword. It is later used by the Shark Ranger.

The Control Dagger is Dominic's secondary weapon. It is used to summon the Rhino Steel Zord.

The Claw Cannon Blaster is the Jungle Fury Rangers' blaster weapon. It channels their animal spirits' energies into a single concentrated blast. At one point, when the three masters were being controlled by the crystal eyes and had their Ranger forms fight the rangers, the masters were too powerful. RJ had to modify the claw cannon and have the rangers fire it not with Tiger, Jaguar, and Cheetah, but with Elephant, Bat, and Shark which destroyed thier Ranger forms and returned the masters to normal.

When first used in the episode "Dance the Night Away", it took an absurd amount of time to charge up to destroy Toady yet it was far quicker every other time.

The Battle Claws are part of the Jungle Fury Power Rangers' uniform. It appears to be the item used to summon their various weapons such as the Junglechucks, Jungle Bo, Jungle Tonfa and Claw Cannon Blaster. It can also charge up with electricity and creates a powerful punch.

It is notable that the Beast-Fist Henshin GekiChangers from which the Battle Claws are derived are the morphers of the Gekiranger, rangers of the show where much of the Jungle Fury footage and materials are derived from. This has been set aside for the American show in place of the Solar Morphers. The Claws remain part of the uniform.

The Spirit Ranger trio appear as equivalent to Jungle Master Mode, with their original forms being exclusive to the toyline.

The Strike Rider is the Jungle Fury Red Ranger's main vehicle. Once summoned the Red Ranger gains top-body armor matching the vehicle. It possesses two front blasters as well, generated from the 'eyes' of the Tiger-head motif that forms the head of the cycle. The head and seat itself is hinged on a jaw that separates from the wheels to 'bite' opponents. For High Speed Attack Mode, this jaw further opens and moves the front wheel to the back leaving the head's fangs exposed while the head forms a closed cockpit locking in with Red Ranger's armor. This mode is used for a high-speed charge to the opponent. Even with the added Jungle Master Mode to the ranger's arsenal, the Red Ranger is often seen using the Strike Rider mode even as Yellow and Blue Rangers activate their Jungle Master Modes. While it is unique to the adaptation of Gekiranger, the concept was possibly taken from Kakuranger's Shark Bleeder finisher, as both partially cover the Red Ranger in a similar manner before being driven into the opponent. 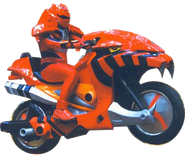 with the jaws open

Casey used a Jungle Karma Pizza delivery scooter to make a delivery to Hamhock, who planned to ambush him by ordering pizza, but failed and was destroyed.

TV STORY-Bad to the Bone