Cylindrical enclosures that allow the J.A.K.Q. to suit up.

J.A.K.Q. Covack (ジャッカーコバック, Jakkā kobakku) is the team's first finisher. The four core members form a ring around a monster and place their heads directly onto it from all four sides, infusing it with their energy to immobilize it as they rotate themselves and their opponent into the air before kicking it away. The monster then explodes in mid-air, usually after the team bring their fists together into a final stance to activate the explosion.

Big Bomber (ビッグボンバー, Biggu bonbā) is the very first "team bazooka" in Super Sentai history, introduced with the appearance of Big One. Each of the four core members produces a piece of the cannon (Spade Ace brings out the barrel, Heart Queen the frame, and Dia Jack and Clover King a wheel each). Big One then loads a missile that is fired at the Invader Monster.

Initially, the Big Bomber attack rips right through a monster, creating a hole in their torso while ultimately making them explode.

TV STORY-Ep. 28: My Secret! A Space Monster in My Pocket

Prior to the first actual usage of Big Bomber, a tiny toy version was constructed used as a "key" for the J.A.K.Q. to know who their new leader would be. When Soukichi Banba initially appears in headquarters after Joker's departure, J.A.K.Q. use the Big Bomber toy as their method of confirmation with Banba supplying the missile and thus confirmed as Big One and their new leader.

Clover King rides a motorcycle called Auto Clover that is a modified Kawasaki KH250. Heart Queen drives Heart Buggy. Spade Ace's car is called Spade Machine. And Dia Jack drives a race car called Mach Dia. Big One, being capable of flight, does not have a vehicle, he just appears on the scene when needed. Auto Clover has one machine gun while the other three have two. 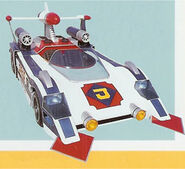 The armored vehicle Jack Tank, piloted by Dia Jack or Clover King, but Spade Ace pilots it. It is armed with a double barreled cannon called the Jack Cannon and has a shovel claw capable of catapulting it and allowing it to burrow.