The In Space Arsenal

The Astro Morpher is the key that morphs its user into a Power Ranger. There are 5 Astro Morphers, one for each core member of the Space Rangers. At the press of a button, the Astro Morpher opens up to reveal a 12-button keypad. Pressing certain 3-digit combinations followed by the enter button will activate four red lights and do one of the following things:

The only code ever seen used in the show is 3-3-5; the other codes, while seen listed on the morpher, are never entered. There is also a "sound icon" button which alerts the Rangers. There also exists a code to teleport the wearer back to the Megaship.

The toy version has an additional code, 9-1-2, which allows the user to play a "Simon Says"-like game. The morpher calls out a number, and the player enters the number; this gets faster and faster, and the player is allowed four mistakes, indicated by the red lights.

The Digimorpher was used by Zhane to transform into the Silver Ranger. He enters the digits "2-5-8-0", which spell out "Mega", to morph. The toy version, like the Astro Morphers, contains other codes (3-digit, specifically), which have the following effects: which follows as such

The Wrist Communicator is a watch-like device rarely used by the Space Rangers to communicate with one another, the Astro Megaship and for teleportation usage as well.

See also: Drill Saber
The Spiral Saber is the personal weapon of the Red Space Ranger. It is a drill-shaped weapon used as a sword for melee combat. On its handle is the M emblem of the Space Rangers. When Andros summons it, it materializes in a beam of red energy. In normal saber mode, Andros could perform a blue energy slash. When combined with the Astro Blaster, it is referred to as the Spiral Saber Booster Mode. In this mode, the Spiral Saber becomes a long-range weapon that shoots laser beams at its targets. Shortly after this mode was introduced, it began to gain a dual-tipped firing aperture when in Booster Mode. Typically, Booster Mode was used alongside the Quadroblaster for a dual finisher; it would fire a golden ball of energy with a twirling red contrail.

See also: Mega Rod
The Lunar Lance is the personal weapon of the Black Space Ranger. It takes its' name from the crescent moon-shaped attachment on the end, which Carlos frequently uses to grapple and hurl enemies. Carlos could also perform an energized double slash attack with the Lunar Lance to take down a monster.

See also: Mega Tomahawk
This is the personal weapon of the Blue Space Ranger. It is similar in design and use to the MMPR Power Axe, except it lacks the ability to transform into a blaster without the help of the Astro Blaster.

See also: Mega Sling
This is the personal weapon of the Yellow Space Ranger. It is a slingshot that fires energy pellets at a rapid rate.

See also: Mega Capture
This is the personal weapon of the Pink Space Ranger. Shaped like a miniature satellite dish, it fired pink rings of energy as projectile weapons at foes. Cassie could use it in conjunction with her Lightstar helmet mode to track down invisible enemies.

See also: Multi Attack Rifle
This combination of Lunar Lance, Astro Axe, Star Slinger, and Satellite Stunner was fired by the Black Space Ranger. It was most often used alongside the Spiral Saber Booster Mode for a dual finisher; the Quadroblaster fired a blue-and-gold energy ball.

The Astro Blaster is the standard sidearm of the primary Space Rangers. Each Ranger carries an Astro Blaster on his or her belt and can use them as handguns when necessary. Astro Blasters are capable of splitting into two smaller guns, diminishing their power but allowing the Ranger to fight with two guns instead of one. They fire blue beams regardless of the color of the Ranger firing them. A single direct hit from an Astro Blaster is enough to take down a Quantron. They can also combine them with their Special Weapons to create the weapon's Booster Mode, which could fire more potent blasts. When fired together, the Booster Mode weapons could create a golden energy sphere to destroy monsters.

The Red Battlized Armor is used by Andros (Red Space Ranger) to turn him into the Red Battlized Ranger. In "Mission To Secret City ", Andros was being held hostage with other citizens. When he tried to fight back against Vacsacker, he failed miserably. As he laid there, about to be defeated, Carlos' friend, Silvy, pressed the "3" on Andros' morpher which activated the Battlizer mode. Andros, now armed with the Battlizer, rescued the hostages. He would later use the battilizer to save Ashley from Darkonda and the Quantrons in the season finale. However, moments later, Ecliptor would shoot him down with eye lasers. Andros would later use the battlizer to fly to Astronema's fortress. 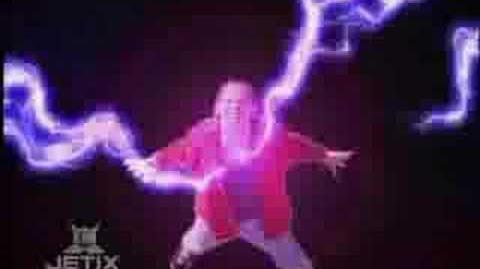 It can also be used to control the Delta Megazord via voice command, and for the Astro Delta Megazord formation, Andros unclips the Battlizer from its' wrist strap and locks it into a special control panel in the Astro Megazord cockpit. In this instance, the first button would initiate the Flying Power Punch attack. Although Andros was its primary user, the Battlizer was also used by Zhane on at least one occasion.

See also: Silver Blazer
Silver Ranger's arm mounted weapon has a blaster and sword mode. When preparing to finish off a monster, Zhane would typically charge it to it's maximum power level (indicated by several lights blinking around an embedded microchip in the barrel of the gun/base of the blade), then pepper the target with rapid-fire energy shots; he would then switch it to sword mode and deliver a powerful blue energy slash.

When Zhane disguised himself as a Silver Psycho Ranger, he also utilized a custom variant of the Super Silverizer. 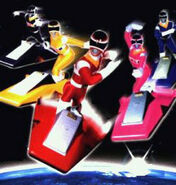 A 6-wheeled mobile unit, designed for planetary travel, the Megatank was built by Andros and designed for navigating rough terrain. One major feature was the large yellow claw next to the cockpit; the claw could unfold to remove obstructions or otherwise perform dangerous tasks. The Megatank was stored aboard the Megaship and, when commanded, could automatically launch (plummeting through the air from the Megaship, which would temporarily assume a spot in Earth's atmosphere) and arrive at the Rangers' location; alternately, the Rangers could pilot it directly from the Megaship.

The Megatank helped the Rangers on many different occasions, some involving very dangerous moments. In the Space Rangers fight with the Psycho Rangers the Megatank was used twice, once as a decoy utilizing the coded signal the Psycho's used to hunt the Rangers down. With the decoy the Rangers had a small window of opportunity to morph and try to help the Silver Ranger who was trapped. The second time, the Rangers ran the tank on silent underground to the location of the Mega Voyager, where its Zords lay scattered in an open field. The tank transported the Rangers underground while the Mega Winger and the Delta Megazord held off the Black and Red Psycho Rangers.

The Megatank later disappeared in the series, after it guided the Rangers underground to a deserted location void of people. After this, the tank vanished and was no longer seen in the series.

Zhane's speedy motorcycle can transform into a Galaxy Glider, for when the chase heads for the skies.