This page lists all the weapons, devices, and vehicles used by the Gorengers. Below is the inventory, which also reflects on the Gorenger series page as well as the team page of the Gorengers.

Unlike the Super Sentai that would follow, the Gorengers transformed at will with no apparent transformation device, the transformation being commonly initiated by shouting "Go!" while either spinning or jumping. As Daigoro Kumano learned on his first mission as Kirenger, a calm and focused mind is needed to achieve the transformation.

TV STORY-Ep. 55: The Colored Daishogun! Tuthankamen's Curse The transformation can be reversed at will by simply repeating the process.

The suits mainly used by the Gorengers. They are shown to be able to increase their strength, power, and speed. According to Akarenger, when transforming, the Gorenger Suits release an electrical charge and one must have a calm and focused mind to endure it and complete the transformation. They were destroyed by Diamond Mask in Episode 43.

Removable rockets each of the Gorangers had on the side of their belts for flying. With the Birdies, the Gorengers are capable of performing the Gorenger High Jump.

Each of the Gorengers' helmets are equipped with a removable, secondary visor which transforms into their individual weapons. 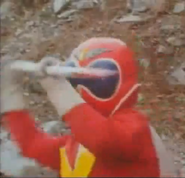 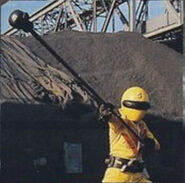 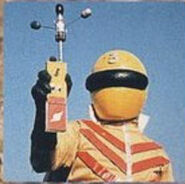 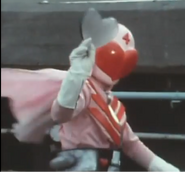 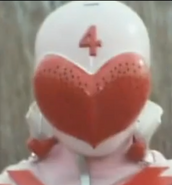 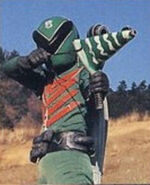 Red, Blue, and Green Machines (1-54) - The motorcycles driven by Akarenger, Aorenger, and Midorenger. Kirenger and Momorenger ride in the sidecars of the Blue and Green Machines; the Red Machine has no sidecar. Together, they can perform the Machine Scramble to evade firepower.

TV STORY-Ep. 32: Hot Blue Wind! No Response from Variblune The Red Machine is equipped with the Harpoon Bute.

TV STORY-Ep. 35: Big Strange Black Bird! Condoler War Bomber Fleet Armed with explosives and sent to the Navarone Fortress, which exploded, taking them (but not the Gorengers) with it.

A Suzuki GT750 is the base model for Red Machine and a Suzuki GT380 is the model used for both Blue and Green Machines. 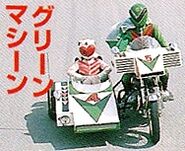 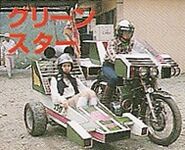 Varitank (43-84) - Six-wheeled tank with claw arms that rolls out of the 'beak' of the Varidreen.