This page lists all the weapons, devices, and vehicles used by the Gokaigers. Below is the inventory, which also reflects on the Gokaiger series page as well as the team page of the Gokaigers.

The Ranger Keys (レンジャーキー, Renjā Kī) are both the source of the powers for the Gokaiger as well as the suits which they use for their own and all other borrowed Sentai powers. Their own personal Ranger Key allows for a suit similar to their own Gokaiger designation to form around their bodies which they use for combat. Whenever another Ranger Key is activated, that suit and helmet temporarily replaces their own and allows for the Gokaiger to access all powers and abilities associated with the Ranger and the team they are wearing.

The Ranger Keys (レンジャーキー, Renjā Kī) are physical manifestations of the powers of the prior Super Sentai teams which were lost and scattered across space following the defeat of the first Zangyack invasion at the climax of the Legend War. In addition to using them to assume the forms and power of past Sentai heroes, the Gokaigers can also use them to further enhance their own Final Wave attacks. Other variants are Rider Keys, Buddy Roid Keys, Megazord Keys, Phantom Ranger Keys and Metal Hero Keys

"Final Wave!"
―Finisher announcement when inserting a Ranger Key in the Gokai Saber.[src]

Gokai Saber (ゴーカイサーベル, Gōkai Sāberu): The Gokai Saber is the Gokaigers' primary melee-combat sidearm, resembling a cutlass with a built-in grappling hook and a Gokai Cylinder in the back of the blade triggered by pressing the Gokaiger logo on its hilt.

Its Final Wave attack is the Gokai Slash (ゴーカイスラッシュ, Gōkai Surasshu) where a Ranger Key is inserted into the Gokai Cylinder mounted behind the blade, allowing the Gokai Sabre to perform either an energized slash or fire an energy blade by swinging the sword.

In battle Gokai Blue and Gokai Yellow will typically trade their Gokai Guns with Gokai Green and Pink for their Gokai Sabers.

"Final Wave!"
―Finisher announcement when inserting a Ranger Key in the Gokai Gun.[src]

Gokai Gun (ゴーカイガン, Gōkai Gan): The Gokai Gun is the Gokaigers' primary ranged-combat sidearm, resembling a flintlock pistol. Unlike the firearms of other Sentai teams and keeping with Gokaiger's pirate motif, the Gokai Gun fires energized metal balls instead of laser blasts. In battle, Gokai Green and Pink will typically trade their Gokai Sabers with Gokai Blue and yellow for dual Gokai Guns.

By pressing the Gokaiger logo on the gun's side, a Gokai Cylinder is raised up from the lock; allowing a Ranger Key to be inserted into it to fire a supercharged bullet called the Gokai Blast (ゴーカイブラスト, Gōkai Burasuto) Final Wave. The Gokai Gun's power can be enhanced even further by utilizing them in tandem with the Gokai Sabers in the Gokai Blast and Slash (ゴーカイブラストアンドスラッシュ, Gōkai Burasuto ando Surasshu) Final Wave where two keys, one for each weapon (usually the Gokaigers' own key in one and the corresponding Gorenger key in the other), are utilized to perform a Gokai Blast augmented with a Gokai Slash energy blade flung from the Gokai Sabers.

Following their defeat at the hands of Basco during the acquirement of the Ohrangers' Great Power, Doc attempted to add a second Gokai Cylinder to his Gokai Gun in order to use more than one Ranger Key and increase its power. But after two shots, it overloaded and fried the Gokai Cylinders, forcing Doc to abandon the idea in favor of creating the Gokai Galleon Buster.

"Final Wave!"
―Finisher announcement when inserting a Ranger Key in the Gokai Spear(or any of its modes).[src] 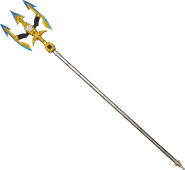 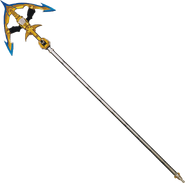 It fires a beam of intense energy formed from the collective power of the 35 Sentai, the beam making up the team symbols of the 35 teams, ending with the 35th Anniversary symbol.

This is the only one of the Gokaigers' weapons without a Ranger Key slot.

, the Super Sentai Bazooka was used by the Goriders

In its default state, the "sail" lays flat against the "deck" and the Gokai Cylinders swivel to the side to resemble cannon ports. If no Ranger Keys are inserted, the Gokai Galleon Buster can be used as a double barreled machinegun with greater firepower than all five Gokai Guns combined. To access the finisher state, the black lever underneath is pulled back akin to a pump-action shotgun, deploying the sail and Cylinders upward. Once five Ranger Keys have been set into the Gokai Cylinders, it is able to a fire an energy blast in the shape of the Gokai Galleon's bow called Rising Strike (ライジングストライク, Raijingu Sutoraiku) that rams through the opponent.

Typically, the five main Gokaiger keys are used to empower the weapon. On occasions where one of the core five are absent, their place can be taken by Gokai Silver; as when Gai took Gokai Blue's place during a fight with the Dogormin while Joe was fighting Barizorg.

During the climax of the final battle with Zangyack Emperor Ackdos Gill, Gai managed to impale Ackdos with the bowsprit of the Gokai Galleon Buster before inserting his Gokai Silver Key to perform the Showy Wave (派手にウェーブ, Hade ni Wēbu) finisher, firing a Rising Strike at point blank range to finally kill the Zangyack Emperor.

When using non-Super Sentai Keys in the Gokai Galleon Buster, it results in a unique finishing attack. With the Kamen Rider OOO

Aside from it's variations on TV and in the movies, the toy reveals that indeed the Gokai Yellow key can be used for a Yellow Charge (イエローチャージ, Ierō Chāji). Should a non-Gokaiger key be used, the Buster would announce whatever charge it would be: Red, Blue, Yellow, Green, Pink, and strangely Black. While any other color (including Silver) results in a Special Charge.

The voice of the Gokaigers' equipment is provided by Tomokazu Seki (関 智一, Seki Tomokazu), who also voiced the Greatest Treasure in the Universe as well as providing the narration for Gokaiger.