This page lists all the weapons, devices, and vehicles used by the Gingamen. Below is the inventory, which also reflects on the Gingaman series page as well as the team page of the Gingamen.

Ginga Cloth (ギンガ聖衣 (クロス),, Ginga Cloth Ginga Kurosu): The Gingaman suits. The Ginga Cloth have the power and the features of the respective Starbeast. They appear in the form of Enhanced Suits. Each suit is powered by their respective Gingaman's Earth power.

When in Civilian Mode, each Gingaman has a civilian weapon which provide adequate defense against the Yartots but are useless against the Majin:

Starbeast Sword (星獣剣, Seijūken): The primary weapons of the Gingaman. When not in use, the Starbeast swords compress to the size of a dagger and are kept in sheaths on their belts. When drawn, the hilt opens up and the blade extends into a full length sword. By channeling their Earth into the Starblades, each of the Gingaman can perform a sword slash energized with the power of their respective elements:

The Starbeast Swords in their compacted form 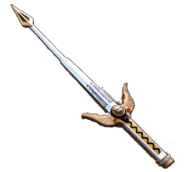 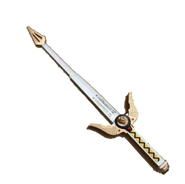 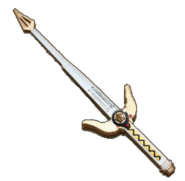 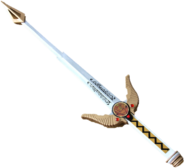 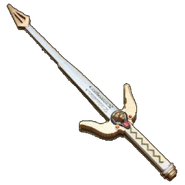 Mechanical Blade Kiba (自在剣機刃, Jizaiken Kiba, Machine Blade): Fang-shaped blades that can transform into five different weapons. 3,000 years ago, the Kibas were wielded by the first Gingaman team as the counterpart weapons to the Starbeast swords. Stolen by the Balban Majin Buctor so he could add them to his collection, the current GingaRed Ryouma was able to bait Buctor with fake Starbeast Swords, allowing him and the other Gingamen to retrieve them before they could be melted down to make a sword that could break the seal on Daitanix.

When the Starbeasts were petrified by the Balban Tagredor's poison, the Gingaman learned that that the Kibas had the additional ability to draw power from the Starbeasts' home planets. By channeling their Earth power into them to call upon the Starbeasts' power, the Gingamen were able to revive them as well as obtaining the "newly born" power to transform them into Silver Starbeasts.

Beast Attack Rods (獣撃棒, Jūgekibō): Created by Moak following the appearance of the Budoh Majin mob, the Beast Attack Rods are staff weapons that can also be compressed into bazookas by the command Juugekiha to fire the Galaxy Beast Attack Bullet (銀河獣撃弾, Ginga Jūgekidan) energy blasts from all five Beast Attack Rods when fired together. GingaRed can also uses his in rod mode to perform the Blazing Flames Jugeki attack. Moak later created newer and more advanced rods in episode 47 to fight the Earth Demon Beast. Unlike the originals, these new Rods can also be used with the Beast Armor Shine or by the Gingamen in human form. The upgraded Beast Rods can perform a new attack called the Flashing Beast Attack Bullet (閃光獣撃弾, Senkō Jūgekidan).

Bull Riot (ブルライアット, Buru Raiatto): BullBlack's personal sword which he passes on to Hyuuga along with his title and power. By drawing the sword and pointing it upwards while calling out, "Knight Reincarnation!" (騎士転生, Kishi Tensei) Hyuuga transforms into Black Knight. The sword is capable of various slashing attacks; such as Black Chop (黒の一撃, Kuro no Ichigeki) and "Black Attack" and can also be combined with its sheath to form an energy rifle/shotgun.

Knight Axe (ナイトアックス, Naito Akkusu): A cursed weapon that Hyuuga receives from Bucrates which has the power to destroy the Star Soul Jewel which sustains Zahab's life. In order to wield it, Hyuuga was forced to sacrifice his Earth Power. If held by anyone else with Earth Power, as Ryouma found out when he tried to pick it up despite his brother's warning, the Knight Axe will inflict searing pain on the transgressor.

TV STORY-Chapter 41: The Revival of the Demon-Beast The Knight Axe can also be enlarged to be wielded by BullTaurus against Giant Majin which can perform the Great Bison Fierce Cut (大牛鋭断, Daigyū Eidan) technique. During the final battle with Zahab, the Knight Axe was destroyed but not before Hyuuga was able to use it to crack Zahab's Star Soul Jewel, and after Ryouma encourages him his Earth Power is not completely gone, it enables him and Ryouma to destroy the Star Soul Jewel with their combined Mane of Flames attacks.

Throwing Dart:  A small dart that BullBlack gave to his younger brother Krantz.  After Krantz was killed by Captain Zahab, BullBlack took back the dart, using it as a surprise weapon to announce his presence or attack an enemy's blind side.

Beast Armor Shine (獣装光, Jūsōkō): A power upgrade the team receives from the Lights of Ginga which grants them enhanced weaponry and increased strength.  When activated by the command "Howl! Lights of Ginga!" (ほえろ！ギンガ光！, Uwari! Ginga Hikari!) jeweled armbands appear on their left biceps, their buckles and Starbeast Swords become larger and more elaborate, and they gain an armored claw brace on their left forearm. Their team attack is the "Galaxy War Radiance" (銀河戦光, Ginga Senkō), where each of the Gingamen transform into balls of energy before combining as one to ram though their opponent. Galaxy War Radiance can also be performed by an individual Gingaman (as Saya demonstrated against the Iliess Majin Morgumorgu and Hayate against Battobas Majin Bombs), although it is less powerful without the others. Beast Armor Shine's one weakness is that all five Gingamen need to be present in order for it to be activated. However, Gaoranger vs Super Sentai had Gouki access the form on his own and even use Galaxy War Radiance. Whether this was a one-time thing or a removal of the weakness is unsure.

Beast Armor Claw (獣装の爪, Jūsō no Tsume): A clawed brace worn on the left forearm while in Beast Armor Shine.

Moak later created newer and more advanced Beast Attack Rods to fight the Earth Demon Beast. Unlike the originals, these new Rods can also be used with the Beast Armor Shine or by the Gingamen in human form. The upgraded Beast Rods can perform a new attack called the Flashing Beast Attack Bullet (閃光獣撃弾, Senkō Jūgekidan).

Beast Racehorses (獣走馬, Jūsōba): Horses that serve as the team's transportation and companions.

During the battle with the Illiess Majin Merudameruda, the Gingamen found her a difficult opponent once she summoned her Gorgondia motorcycle.  As the Galaxy War Radiance failed to defeat her, Hyuuga appeared and revealed that Bullblack's spirit had revealed to him how the Lights of Ginga can change shape depending on the user's will. The Gingamen then focused their will and externalized the Lights into the Mobile Steed Galeo Pulsar (機動馬ガレオパルサー, Kidōba Gareo Parusā), a motorcycle modeled after Ginga Red's Starbeast Ginga Leon.

When summoned, the Galeo Pulsar temporarily removes the Beast Armor enhancements from the Gingamen. Its attacks include the Lion War Blast (laser beams from its headlights/eyes) and the finishing move, Lion Shining Armor (獅子の装光, Shishi no Sōkō), in which it envelops Ginga Red inside of its armor and then rams into its target with flaming Lights of Ginga energy.  After a Majin is defeated, the Galeo Pulsar changes back into the Gingamens' Beast Armor enhancements which are then returned to them.