This page lists all the weapons, devices, and vehicles used by the Dino Rangers. Below is the inventory, which also reflects on the Dino Thunder series page as well as the team page of the Dino Rangers.

The Dino Morphers are the Morphers for the Red, Blue, and Yellow Dino Thunder Rangers. To activate them, the Rangers call out "Dino Thunder, Power Up!" and press their morphers. They can also be used to summon the Dino Zords or communicate with each other and/or Hayley. They were developed by Tommy Oliver and Hayley Ziktor.

The Brachio Morpher is a morpher device consisting of connecting two parts to it, like the Turbo Morpher. It is powered by the Black Dino Gem. It is activated when Dr. Oliver calls out "Dino Thunder, Power Up!" then inserts and turns a special key. This is the morpher of the Black Ranger. It was created by Hayley for Tommy, when he discovered a new Dino Gem in the area.

The Drago Morpher is the White Dino Ranger's morphing device, initially granted to him when the evil White Dino Gem bonded with and corrupted him. Primarily activated with the call of "White Ranger, Dino Power!", although the morphing call has varied at least twice.

When the Red Dino Ranger becomes the Triassic Ranger, his Dino Morpher changes from its usual red to a gold color.

This common Ranger weapon of the Red, Blue, and Yellow Dino Thunder Rangers and resides at the side inside its holster in laser mode. The Thundermax Saber is highly versatile and can be used for both short and long range attacks.

The Tyranno Staff is the Red Dino Thunder Ranger's personal weapon. It has the power to release an energy orb, similar to the Brachio Staff.

The Ptera Grips are the personal weapons of the Yellow Dino Thunder Ranger.

The Brachio Staff is the weapon of the Black Dino Ranger. It has four modes; including: Wind Strike, Earth Strike, Wave Strike, and Fire Strike. All four modes have intense power and it can also release a powerful energy orb. The most utilized one is the Wave Strike, which Tommy uses to create a giant wave when the Thundersaurus Megazord combines with the Stegozord.

The Drago Sword is the weapon of the White Ranger, Trent Fernandez. It has the ability to fire laser arrows, all of which explode on impact. Also, it can combine with the Z-Rex Blaster.

A powerful cannon made of the Tyranno Staff, Tricera Shield, and the Ptera Grips. The Brachio Staff can combine with the Z-Rex Blaster to create an even stronger blast of energy. All five Ranger weapons; the Tyranno Staff, Tricera Shield, Ptera Grips, Brachio Staff, and Drago Sword can combine to form the Z-Rex Blaster, Super Mode. It fires a super blast of energy at its opponents.

Hidden beneath a waterfall for untold ages, the Shield of Triumph, when infused with the power of the Blue, Yellow, Black, and White Dino Gems, would transform from a white, powerless relic to a colorful and powerful device which could then only be used by someone "in tone with the mystical dino energies" as the Black Dino Ranger Doctor Tommy Oliver put it. Conner at one point referred to the weapon as the Triassic Shield.

Thus, the Shield was obtained by a person Oliver believed to fit the requirements, Conner McKnight, who used the shield's power, along with his own Red Dino Ranger powers, to become a completely new Other Ranger known as the Triassic Ranger. After this, Conner would sometimes require repeated power transfers from the Blue Dino Ranger Ethan James and the Yellow Dino Ranger Kira Ford. However, Conner would also, in times of extreme stress or necessity, activate his Triassic powers on his own with the shield.

After Conner morphed into the Triassic Ranger, he also often activate the shield's other abilities, seemingly as second nature.

These other abilities included: the shield's second mode, called the Sword of Triumph (which was basically just the shield with a blade bit extended, like on a Swiss Army knife), and the power to transport the Triassic Ranger and his opponent into another reality. The Triassic Ranger referred to it as his world and others commonly dubbed it the "Triassic Dimension". In the Triassic Dimension, the Triassic Ranger appeared to have complete control over reality, meaning his enemy was doomed. After their defeat, he would return with them to other world, where his enemy would often explode, somewhat spontaneously. Conner at one point referred to the sword as Triassic Shield, Saber Mode.

Finally, the shield also acted as the Triassic Ranger's control key for the Mezodon Zord, Mezodon Rover and Mezodon Megazord. The shield itself, as a whole, looked like the Mezodon Zord's head, but it was also decorated with face places of the Cephala, Parasaur, Dimetro, and Ankylo Zords, allowing it to control them as well. This effectively made those Zords the Triassic Ranger's and allowed him to form the Triceramax Megazord.

Super Dino Mode is an ability utilized by all five Dino Rangers. By drawing energy directly from their Dino Gems, they go through an almost feral transformation. Their helmets roar, the patterns on their suits transform into spiked armor, and their strength increases greatly. Additionally, Kira is granted a pair of wings while Trent and the White Ranger Clone gain a pair of blades.

The Super Mega Rangers also have access to this power-up while in Legendary Dino Thunder Mode, though it was called Dino Rampage Mode

TV STORY-United as One for unknown reasons. The name is a direct reference to Abaranger, which means "rampage Ranger."

The Triassic Ranger is a power-up mode used by Conner McKnight, the Red Dino Ranger, formed by the Blue and Yellow Rangers (Kira and Ethan) giving their power to him temporarily. He was eventually able to use this without borrowing other Ranger's powers. Though not confirmed or denied, it is likely possible that the Triassic Ranger could be a Sixth Ranger and that a separate being could have possessed the power.

The Triassic Battlizer is used by Conner McKnight (Red Tyranno/Triassic Ranger). In the episode The Passion of Connor, Conner begins to doubt his dedication when a girl he admires - Krista is willing to do whatever it takes to fight for her cause. Conner realizes when Krista's life is in danger from Zeltrax, that he will do anything to save her. The Dino Energy increases and the Battlizer is unlocked. The Battlizer armor gives Triassic Ranger super stretch arms and legs, a Mezodon faced shield, lightning fast agility, super fire power, a dragon yo-yo attack, and shoulder cannons, which fire massive amounts of energy.

Dino Gems are the source of power for the Dino Rangers. They were salvaged from the meteorite that crashed into earth, millions of years ago, destroying the dinosaur population. Five Dino Gems of different colors (red, blue, yellow, black, and white) were found.

When Tommy Oliver and Anton Mercer had their lab invaded and destroyed by Mesogog, some of their experiments were scattered across the outskirts of Reefside. In the episode Wave Goodbye, Tommy found three eggs (color coded to match the three rangers at the time) that he recognized as having unborn Raptor Riders in them. He took the eggs back to his laboratory in his house's basement and began to tame them.

Later on, when the Rangers needed a way to chase the monster, Tommy sent the Raptor Riders, which allowed them to catch up with the monster before having them resort to their zords.

Despite being introduced early in the season, they were only rarely used, due to them being made obsolete by the Raptor Cycles just two episodes after their first appearance. They weren't seen again until Burning at Both Ends.

The Raptor Riders are color-coded to match their ranger. They are mechanical in appearance, but resemble velociraptors (hence their name), and appear somehow as a sentient creature.

Raptor Riders are able to easily scale walls, jump buildings, and run at speeds that even the rangers in their morphed state could not reach; however, the speed at which they could run still paled in comparison to those of the ranger Raptor Cycles.

When Tommy Oliver was being held captive in Mesogog's lab, the Rangers tracked down an invisiportal, but Hayley warned them that they would have to reach a speed of 595 miles per hour, otherwise they would be ripped to pieces by the portal's turbulence (which creates a plot hole, as rangers and monsters were able to step through an invisiportal on foot both before and after Hayley said that). To solve this dilemma, Hayley gave the rangers the Raptor Cycles, which were their vehicle of choice for the rest of the series.

Unlike the Raptor Riders that preceded them, the Raptor Cycles looked nothing like velociraptors, or any dinosaurs for that matter; instead, they looked a lot like any other colored motorcycle.

Aside from their mundane appearance, they also have lasers that can be shot out of their headlights. The rangers find that they can pull off Evel Knievel-style stunts on their Raptor Cycles with the greatest of ease.

Due to their improved speed and weaponry, they quickly replaced the Raptor Riders as the rangers' preferred method of transportation.

The Dino ATVs are motorized vehicles that the White and Black Dino Rangers use. Trent obtained them by cheating Mesogog in a deal to destroy the Rangers, and he also tried to cheat Tommy by giving him the black ATV, hiding the fact that it was out of control, but thanks to Hayley, Tommy was able to control the vehicle. Both have armored designs of Brachio and Drago Zords respectively, and are equipped with powerful artillery. 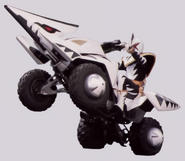 The most powerful weapon in the Dino Thunder arsenal. The Triceramax Command Center Truck is a mobile command center the Dino Thunder Rangers use. Hayley designed it to use against Mesogog's Island Fortress. It was only seen in the episode "Thunder Struck-Part 1" and was equipped with a giant missile shaped object that can fire yellow lasers capable of destroying Messogog's Island with a single shot.