The Dino Saber is the Rangers' primary melee weapon. A Dino Charger may be inserted to unlock a full-powered slash. This weapon can also fold and combine with the Morpher for powerful laser blasts as the Dino Blade Blaster. This is also used by Nate against Evox in Power Rangers Beast Morphers.

The Dino Charge Purple Ranger is shown to be able to extend the blade from the Dino Saber when in Dino Blade Blaster formation for short range attacks to create the Power Blade.

The Dino Super Drive Saber is a special weapon that allows one of the Rangers to activate and morph themselves and the other Rangers in Dino Super Drive Mode so the Rangers can use this new mode in the Megazord cockpits. To use this form, the Super Drive Charger must be inserted into the Dino Charger slot just below the weapon's handle, which will transform every currently available ranger into Dino Super Drive. The weapon also allows the insertion of five other Dino Chargers into the spinning weapon bay that enable the weapon's final attack (or the Megazord's finisher).

Multiple rangers can simultaneously summon a copy of this weapon only if they are occupying different Megazords. However, this is optional.

The Dino Spike is the combination of all the core Dino Charge Rangers' personal weapons with the use of the Dino Spike Charger. It resembles a giant javelin and is used to perform the team's finisher.

The T-Rex Chopper is a combination of Red Ranger's T-Rex Smasher and Black Ranger's Para Chopper.

The T-Rex Smasher is the Red Ranger's weapon.

The Para Chopper is the Black Ranger's weapon.

The Triple Spike is the combination of the Stego Shield, Raptor Claw, and Tricera Drill.

The Stego Shield is the Blue Ranger's weapon.

The Raptor Claw is the Green Ranger's weapon.

The Tricera Drill is the Pink Ranger's weapon.

The Royal Dino Punch is the Graphite Ranger's special fighting move, which seems to be the enhanced version of his boxing skills, summoning a spiked mace (resembling the Pachyzord's tail) on a chain. The Red Ranger (and perhaps others) can also use this technique with the Pachy Charger.

The Silver Strike is Doomwing's signature move in which he unleashes a devastatingly powerful punch at his opponents.

The Dino Com is a belt buckle that serves as a utility device for the Dino Charge Rangers. It can hold up to 3 Dino Chargers and, as its name implies, act as a communicator. 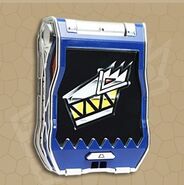 See also: DeinoChaser
Dino Cycles are combined from two smaller unicycle-like vehicles who use one Dino Charger together. It is unknown how many sets there are, as the entire team has never been seen riding them at once.