This page lists all the weapons, devices, and vehicles used by the Bioman. Below is the inventory, which also reflects on the Bioman series page as well as the team page of the Bioman.

The Techno Brace is the wrist device worn by the Biomen. They use it to transform.

Bio Suits (バイオスーツ, Baio Sutsu): The powered suits of the Biomen. They are made of Bio Fiber (バイオファイバー, Baio Faibā) with the super-science of the Bio planet. By the action of the Bio-Particles in five bodies, the Bio Suits can demonstrate super powers. In the Episode 9, according to the data gathered by Doctor Man, the Bio Suits have the punching power that range from 2000 to 2500kg and the kicking power that range from 3500 to 4500kg and their destructive power by a dash is 4500kg. In addition, their running speed is 120km/h and their jump height is about 100m.

Bio Swords (バイオソード, Baio Sōdo): All Biomen are armed with Bioswords which have three modes: sword, short sword, and combined gun. Each Bioman has different attacks with it, depending on their specialty.

The Biomen utilized their bodies, internal circuitry, or light constructs to attack. However, a sole Bioman had a separate weapon - Yellow Four II.

The Biomen's special technology allows them to perform several attacks

As opposed to having one or two standard team finishers, Bioman utilizes multiple finishers, under the guise of the move series known as Bio-Electron. When utilized, the super-electronic brains within all five Biomen's helmets synchronize (depicted on camera as all helmets merging into Red1's helmet in the center), allowing for them to simultaneously perform an attack that defeats an opponent.

When Doctor Man begins to upgrade the Big Three and the three Beastnoids that survived his "survival experiment", the Biomen discovered that their Bio Electron moves no longer work, forcing the team to begin to develop a Super Electron to fully utilize the power of their internal Bio Particles in conjunction with their Bio Suits. When fully developed and realized, the five Bioman fly high in the air with their awakened power and combine their heads together, releasing a swarm of Bio Particles that converts them into energy that slams right into an opponent.

The Biomen flying into the air

to perform the finisher.

Bio Mach 1 and Bio Mach 2 - Red One's and Yellow Four's respective motorcycles. Both use a Suzuki DR250S as the base model. [1]

Bio Turbo - four-seater rover. It uses a Mazda RX-7 as the base vehicle. 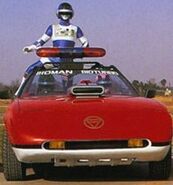