The Wristcom is a smartwatch-like device used by the Beast Morphers Rangers & Grid Battleforce Employees as a communication device.

The Cheetah Beast Blaster is a cheetah-based blaster for Beast Morphers Red to use for his zord in Battle Mode or Megazord for when doing a final attack against his enemies.

The Red Ranger's helmet changes to its scope-like mode whenever he uses the Cheetah Beast Blaster.

Final attack
Add a photo to this gallery

The Cheetah Claws are the main weapons for Beast Morphers Red to use in Red Fury mode. During testing, a arrogantly determined lab assistant candidate names Meghan blackmailed Zoey into giving her the job, but she didn't follow Nate's instructions and ended up filling the claws with too much Morph-X. After finding out about her blackmail, Commander Shaw fired Megan from Grid Battleforce, and the claws were fixed to work as intended. Although Devon is no longer using Red Fury Mode, he can still summon it via Transporter.

Beast-X Cannon: The combined form of the Beast-X Blaster & the Beast-X Saber that fires a powerful attack called the Beast X Cannon Blast which can be used to finish off Robotrons. In the episode "Gorilla Act", a single shot punched a hole straight through Turbotron's chest fan which caused fatal damage. Its most impressive show of power was in the episode "Rewriting History" when, once shot at point blank range, it ripped a hole right through Vargoyle and destroyed him forever.

The finisher for this weapon is the Beast X Slash where all three Rangers generate their Sabres and flick a switch on the hilts, charging up the blades with Morph-X energy. They would then all simultaneously energy slash the Robotron, destroying it almost immediately.

The Striker Saber is the close-combat/personal weapons of choice for Beast Morphers Gold and Beast Morphers Silver, which is a gold-and-silver sword that can turn into a steering wheel for the cockpits of Beast Wrecker Zord and Beast Jet Zord.

Red Fury Mode is Devon Daniels's temporary Battlizer to use in battle against his enemies that he gained by having a Fury Cell attached to a bracelet around his arm. While powerful, the Fury Cell's energy used in this form didn't usually last long, and had a side effect of slowly turning Devon evil. It was first used in the episode "Sound and Fury" to defeat Tubatron 2.0 who had destroyed all of the other Ranger weapons. Fury Mode was disused since the following episode "Seeing Red" due it to it mentally corrupting Devon.

The finisher for this mode was the Cheetah Slash. He can charge up his claws with red energy and slash the Robotron with enough force to immediately obliterate them. This was able to destroy Tubatron 2.0.

X-Bikes are Morph X powered bikes created by Zoey and Nate to help reduce the traffic problem in Coral Harbor and to stop Mayor Daniels from building a road through a forest. People liked Ben and Betty's X-Bike because it looked cool and stopped using Zoey's after Needletron attacked, but the road construction was canceled after people switched to X-Bikes following the rangers chasing Blaze on the through town. End of the Road

Transporters were created by Nate Silva for the purpose to teleport anything if there are two or more transporters across from each other, caught in the beam, and the coordinates are set to the right place. They come in various shapes and sizes like large and small. However, they do have a side effect that they can damage their surroundings. Beasts Unleashed 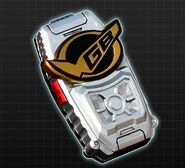 Neural Aligners are metal cone-like objects that can be used to morph and mix people's DNA with that of animals and morph them into Rangers/Avatars. It freezes the people into position. It was used to morph Blaze and Roxy into Avatars and later to morph Devon, Ravi and Zoey into rangers. Beasts Unleashed. Roxy planned to trick Ravi into getting one in order to turn him into a Dark Avatar, but failed to do so. She escaped with it and it was going to be used by Scrozzle.Digital Deception When Steel’s body was going to become the host for Evox, Nate used his Striker Morpher to close the Cybergate, becoming the Gold Ranger in the process The Cybergate Opens

A Neural Aligner.
Add a photo to this gallery

A device used for scanning DNA from living things.

"Gigadrone, incoming!"
Add a photo to this gallery

Cable Strikes were first used in the episode "Gorilla Art" by the Blue, Yellow, and Silver Rangers to tie up a cloaked Vargoyle. They are cables fired from either the Beast-X Blaster or Striker Morpher, used in incapacitating the enemy.