Believing most of humanity to be inferior, the Armed Brain Army Volt (武装頭脳軍ボルト, Busō Zunōgun Boruto) is based on the orbiting space station Brain Base (ヅノーベース, Zunō Bēsu) with its officers using a triangular shuttle to journey between it and Earth. Though it appeared Volt's goal was to create the ideal world for superior geniuses and exterminate those with "inferior minds", it's true agenda is to complete the Giga Brain Wave so Bias can achieve immortality while subjugating the human race via mind control.

The organization was set in the Brain Base, which was in orbit around the Earth, during the Volt's assault on Earth. The leader, Professor Bias, had recruited three humans from Earth, who would take the names Doctor Kemp, Doctor Mazenda, and Doctor Obular. These three would create Brain Beasts to assist in them conducting brutal experiments on Earth until they were defeated by the Liveman. Eventually, the organization gained additional members: Doctor Ashura, a human gangster, whose intelligence was increased by Bias; and two aliens, Guildian Guildos and Chibuchian Butchy. These new members who also act as commanders, and challenged the original recruits' intelligence, so it could increase. Soon, Obular is expelled from Volt and reforms, telling Liveman about Bias's true threat, later. Guildos and Butchy eventually discovered that they were robots, created by Bias to inspire intelligence for his other scientists, shortly before they are destroyed. And Ashura's intellegence which Bias provided, had been taken away when it appeared he would not succeed as a candidate, and he died in a suicide attack against a Brain Beast. After discovering Bias plan to take her brain, Mazenda converted herself completely into a robot, making her brain useless, and Bias executed her, leaving Kemp as the remaining candidate. After he achieved 1000 points of intelligence, Kemp willingly allowed his brain to be taken, and Bias used Kemps and additional eleven brains he collected, to brainwash Earth and forced the people to worship him. However, Red Falcoln stopped him and crashed the base. Thanks to the ghosts of Kemp and Bias' other victims, her was reduced to his old age and his loyal servant, Gash, brought him to the crashed base, where it exploded with them inside, bringing an end to Volt.

Several Jimmers were part of an army of past enemy grunts that were fought by the Gokaigers in Los Dark's ghost dimension which housed the 1500 spirits of the villains defeated by the Super Sentai. After losing some of their number in an initial skirmish, the remaining members from each grunt group merged to form the Combined Combatant. Though the stronger opponent, the Combined Combatant proved to be unstable due to internal conflicting among the grunts composing him over who got to finish the pirates off. Taking advantage, the Gokaigers used the Battle Fever J Ranger Keys to destroy the Combined Combatant with the Penta Force cannon. Kaizoku Sentai Gokaiger the Movie: The Flying Ghost Ship

Great Professor Bias (deceased)
Add a photo to this gallery

Guardnoid Gash (deceased)
Add a photo to this gallery 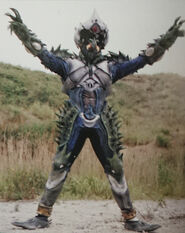 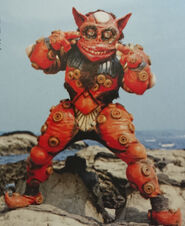 Chibuchian Butchy (deceased)
Add a photo to this gallery 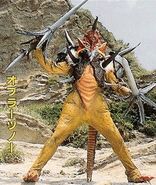 Electron Brain (49)
Add a photo to this gallery 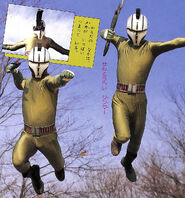 Jimmers
Add a photo to this gallery