The A-Squad Rangers were the first team of S.P.D. Power Rangers. As such, they were known to the best-of-the-best of the academy. However, they went M.I.A. after they were sent off on a mission, thus leaving the protection of Earth to the B-Squad Rangers.

The A-Squad were the elite, albeit extremely arrogant and condescending Ranger team of Space Patrol Delta and the then-main defenders of Earth. During their early appearances in the series, they only appeared morphed and were sent out to face the newest threats to the planet's safety. However, A-Squad was actually corrupt; at first, Bridge Carson had sensed "something off" with their auras but didn't get the chance to find out what. In Confronted, A-Squad was sent to the Helix Nebula to defend it from Emperor Gruumm's forces. However, this was a trap and all contact with them was lost after it was made clear that they were being overwhelmed. They were considered Missing in Action.

Unknown to the other Rangers and their former superiors and colleagues, A-Squad survived and defected to Gruumm's side, wanting to be on "the winning team" (as stated by Charlie, the team's leader and Red Ranger in Endings). They bided their time, destroying the S.P.D. Gamma 4 base for unknown reasons which gave Dr. Katherine Manx and Commander Anubis "Doggie" Cruger some suspicions of who the attackers were after an interrupted distress call made by an S.P.D. personnel member startled them (confirmed at conventions and in interviews by the show's producers), before finally faking a crash-landing on Gamma Orion and sending an SOS signal to have B-Squad 'find' them alive. B-Squad soon became frustrated when Cruger abruptly dismissed them to debrief A-Squad and they realized that they were once again "the reserves, zord cleanup detail," as Jack Landors put it; after a year of being Earth's main line of defense, they were pushed aside.

However, A-Squad revealed their true allegiance and kidnapped Cruger, bringing him to Gruumm's spacecraft. Following this treachery, B-Squad battled A-Squad. Despite A-Squad initially having the upper hand in combat, B-Squad managed to beat them with a combination of smarter battle tactics and their S.W.A.T. Mode. Escalating the battle, A-Squad proceeded to unleash their own Megazord, which transformed from Broodwing's drilling vehicle. Another battle ensued, but when the Delta Base was taken by Broodwing's forces and transformed into the Delta Command Megazord to destroy Newtech City, the Omegamax Megazord was disabled and the Delta Squad Megazord was destroyed. After B-Squad recovered, they retrieved the S.W.A.T. Flyers from the secret underground Zord bay, which only Bridge had known about, and use them to form the S.W.A.T. Megazord to destroy A-Squad's Megazord, finally defeating them.

A-Squad was found guilty of treason, and got "demoted" by Jack, and they were imprisoned in the Containment Cards by B-Squad without a further fight. As a consequence of their corruption, and at the request of B-Squad (who felt that they were B-Squad rather than A-Squad), the A-Squad ranking was retired.

In the pages of Jetix Magazine, A-Squad makes an appearance in the S.P.D. comic strip, in the two-part "finale" of the strip "Invasion". Here, they are brainwashed by Gruumm as opposed to corrupted and turn on the S.P.D. defense armada orbiting Earth. They are arrested by B-Squad with the charges of treason and are never seen again. Their ranking is given to B-Squad for defeating Gruumm and Omni, however, they turn it down and remain the B-Squad instead.

The full capabilities of A-Squad are unknown, but they do have the ability to morph instantly without using any Morpher, and their Ranger suits are heavily armored, giving them greater endurance. Their primary weapons are large laser blasters labeled as being S.P.D. Enforcers, but they do not appear to have anything beyond that. Aside from the Delta Runners, they were shown piloting a Megazord that could transform into a drilling vehicle that belonged to Broodwing. It is presumed to be of S.P.D. origin, due to its cockpit design with various S.P.D. decals; however, its outward appearance when compared to all of the other S.P.D. Zords suggests it may have been modified heavily.

In terms of fighting ability, they are said to be "the best of the best", able to take down their counterparts easily, focusing on the heavy firepower armaments and strong defenses of their weapons; however, once B-Squad used S.W.A.T. Mode and had equal armor and weaponry compared to A-Squad, they were able to defeat them easily. It has been speculated that A-Squad underestimated B-Squad's skills and they were caught off-guard.

The A-Squad suits were kitbashed together from various sources, most recognizably the re-molded helmets from Power Rangers in Space. The updated helmets featured silver around the visors with an S.P.D. logo above the visor and silver vents adorning the top and sides of the helmet. The Black Space Ranger's helmet was repainted green for this series. The actual suit also appears to be color-matched motocross padding with black spandex, the same or similar armor being sourced from Power Rangers Lost Galaxy. The laser guns they carry appear to be modified airsoft or paintball guns.

There is also a slight similarity between the black suits of A-Squad and the S.W.A.T. Mode of B-Squad, as both are heavily armored suits with gear that give the Rangers large and powerful laser blasters.

A-Squad Pink Ranger
Add a photo to this gallery 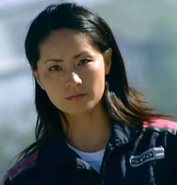 A
Retrieved from "https://powerrangers.fandom.com/wiki/Category:A-Squad_Rangers?oldid=834864"
Community content is available under CC-BY-SA unless otherwise noted.