Start a Wiki
watch 01:38
The Loop (TV)
Do you like this video?
The Cassiopeia System (カシオペア座系, Kashiopea-za-kei) is the star system which contains the planets Kyoryudo, home of Vice Shogun Akyanba,[1] and Shotokuta, home of the Karo Gloven.[2] As one of the 88 Constellations, it is part of the space dominated by the Space Shogunate Jark Matter, with its power embodied by its very own legendary Kyutama.

Cassiopeia was home to one of four sages among the warriors of the 88 constellation systems who fought with Hoshi Minato against Don Armage. Together, they devised a power to break the barrier protecting Jark Matter's capital planet Southern Cross in the Minami Juuji System. Space.37: Lucky, Seen Again With His Father

A constellation in the northern sky, is easily recognizable due to its distinctive 'M' shape when in upper culmination but in higher northern locations when near lower culminations in spring and summer it has a 'W' shape, formed by five bright stars. In Himitsu Sentai Gorenger, nearby the said constellation resides the Black Cross Führer; according to Commander-in-Chief Golden Mask, the cosmic energies of the constellation are toxic to the Black Cross Führer. As a result, the Gorengers would incorporate their finishers with the power of Cassiopeia, such as the Gorenger Hurricane imbued with a fire-like energy manifestation of the constellation.Final Ep.: Great Crimson Victory!! Shine Forever, Five Stars

In Gokaiger Goseiger Super Sentai 199 Hero Great Battle, during the fight with the Black Cross King's Colossus Form, the Gokaigers received the Gorengers' Greater Power, notably the Variblune; they combine GokaiOh and Variblune, resulting into Goren GokaiOh. With it, the Gokaigers destroyed the Black Cross Colossus using Gokai Hurricane Cassiopeia. 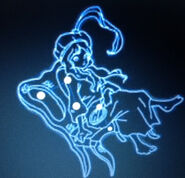 The Cassiopeia Constellation
Add a photo to this gallery

Cassiopeia in Greek Mythology is a beautiful, yet arrogant and vain queen of Ethopia, who boasted her unrivaled beauty which would be her ultimate downfall - as it would incur the wrath of the god of the sea, Poseidon. Ultimately, the punishment suitable for Cassiopeia is to be placed into the heavens, tied to a chair in such a position that, as she circles the celestial pole in her throne, she is upside-down half the time. The constellation resembles the chair that originally represented an instrument of torture.

Retrieved from "https://powerrangers.fandom.com/wiki/Cassiopeia_System?oldid=865352"
Community content is available under CC-BY-SA unless otherwise noted.