RangerWiki
Register
Don't have an account?
Sign In
Advertisement
in: Turbo, In Space, Ranger,
and 17 more
English

"Oh, the honor is all ours. Why don't you take the lead?"
―Cassie to the Mega Rangers[src]

"Cassie, you came to my defense I know you to be loyal and trustworthy, you will bring honor as the new Pink Ranger."
―Katherine entrust Cassie as the next Pink Ranger[src]

Cassie was an amateur singer who first traveled to the city of Angel Grove during the Power Rangers Turbo episode "Passing the Torch". Cassie is a gutsy and sarcastic, music-loving teenager. Cassie moved to the Angel Grove/Stone Canyon area to pursue her dream of breaking into the music business. On her way she met T.J. whom she quickly befriended. Cassie was soon dragged into helping T.J. rescue Katherine Hillard, the Pink Turbo Ranger, and Tommy Oliver, the Red Turbo Ranger.

Katherine, sensing a kindred spirit in Cassie chose her to take her place on the Power Rangers Turbo team as the second Pink Turbo Ranger. Cassie was skeptical of trying new things or rushing into danger but once she was committed to something, she followed it through all the way. When Divatox destroyed the Power Chamber and the Turbo powers, Cassie along with her fellow Rangers blasted off for outer space in a NASADA Space Shuttle to try and rescue Zordon.

As the Pink Turbo Ranger, Cassie controlled the Wind Chaser Turbozord as well as the Wind Rescue Rescuezord.

During Turbo, she developed a crush on the mysterious Phantom Ranger, who was never identified, and never appeared again after the Countdown to Destruction finale from Power Rangers in Space, the sequel series to Turbo.

When the Power Chamber was destroyed at the end of Power Rangers Turbo, Cassie and her friends went up to space to stop Divatox when she had been called to the United Alliance of Evil by Dark Specter. Once there, they met Andros, the Red Space Ranger, who gave them new powers. Cassie became the Pink Space Ranger, and did battle with Astronema for nearly a year while searching for the captured sage and mentor to their predecessors, Zordon.

She helped the other Rangers pilot the Astro Megazord, and she later piloted the Mega V5.

During a mission, Carlos was tricked into attacking Cassie by a monster and was injured. Although she held no animosity toward Carlos, he was deeply affected and decided to retire. It is only after with the help of Adam Park, whom he replaced, that Carlos came back and was careful not to fall for the same ploy again. According to the episode Silence is Golden, Cassie suffers from allergies.

Like her fellow Rangers, Cassie participated in the final battle with the United Alliance of Evil in Countdown to Destruction and was forced to morph in front of all of the people of Earth and do battle with various foot soldiers and monsters until they were victorious due to Zordon's energy wave.

The Return of the Psycho Rangers

After when Andros, Leo, and Mike were planning to rescue the other Galaxy Rangers, the Space Ranger Cassie alongside Carlos, T.J. and Ashley enter the Astro Megaship. Alpha is shocked when he finds that they're taking the Astro Morphers from the vault.

The four remaining Space Rangers have appeared, ready to help. Everyone morphs, she fought Psycho Pink alongside Kendrix, her Pink Ranger successor and the Pink Galaxy Ranger. During her battle against Psycho Pink, Cassie and Kendrix attacks Psycho Pink with their Satellite Stunner and Quasar Saber respectfully. Cassie and the other Space Rangers whip out the Spiral Saber Booster Mode and Quadro Blaster and fire at the Psycho Rangers. The Galaxy Rangers follow it up with an Orion energy attack. The team celebrates back at the Megaship with Alpha revealing that he called Andros and the others to help out. The Space Rangers decide to stay for a while and see the sights on Terra Venture.

The Galaxy Rangers show the Galactabeasts to their new friends, the Space Rangers. Cassie tries dancing on the Wildcat Galactabeasts' head. However, the Wildcat disgusted with the actions of Cassie, she is thrown off as a result.

On Terra Venture, Cassie runs into Kendrix and reveal to Cassie that Psycho Pink survived, they encountered Psycho Pink and transformed against her. However, Psycho Pink escapes. Kendrix tells Cassie how Psycho Pink read her mind and also reveal the location of the Savage Sword.

Cassie is brutally attacked by Psycho Pink using the Savage Sword and Psycho Pink uses it to absorb Cassie's energy and heal her injuries, Cassie de-transforms and her Astro Morpher falls off. Psycho Pink continues absorbing energy from the Savage Sword after stabbing Cassie's Morpher splitting it in two, causing her to turn into her monster form and grow while Cassie suffers pain as a result of her powers.

Psycho Pink battles and gets finally destroyed by the Galaxy Megazord and Astro Megazord. To save Cassie from her pain and Terra Venture from destruction, Kendrix charges into the storm after the Savage Sword despite Cassie's repeated pleas for her to come out. Cassie sees how Kendrix makes it to the eye of the storm, and (despite one final plea from Cassie and the Rangers rushing to stop her) destroys the Savage Sword.

Cassie witness that a backlash from the blast disintegrates Kendrix but her sacrifice ends the storm. The Rangers arrive but they are too late. As the storm fades away, they are greeted by her spiritual form who tells them she will always be with them. The spirit disappears and the Pink Quasar Saber flies off into the sky for parts unknown. Cassie picks up her Astro Morpher repaired by Kendrix as a final gift to her fellow Pink Ranger.

The time has come for the Space Rangers to leave. Cassie is still heartbroken of Kendrix's death, but Andros tells her that she sacrificed her powers in order to save her Astro Morpher and Terra Venture. They say their sad goodbyes, and fly off on their Galaxy Gliders.

Cassie is seen again in a flashback by Damon and Leo, remembering the Psycho Rangers were the worst enemies. Even though they survived their attack with help from the Space Rangers, the memory of losing Kendrix comes as a bitter reminder of the danger they face, even as Karone continues to fight in her stead.

Cassie was featured in a chronicle of Power Ranger history compiled by Tommy Oliver shortly after he formed the Dino Rangers, which was found by the nascent Ranger team in the Dino Lab.

Cassie along with the other Space Rangers and other Ranger teams are seen in Troy's premonition about the Legendary Battle.

Cassie and T.J. were helping the residents of Harwood County after Emperor Mavro's Armada invasion attack.

Emperor Mavro was defeated, but the remaining thousands of X Borgs still stand. Tommy gathered all the existing Power Rangers, Cassie with her fellow Space Rangers as part of the army of Legendary Rangers, led by Tommy, that helped the Mega Rangers defeat the Armada once and for all, Cassie was one of the Rangers who saluted the Mega Rangers before fighting in a huge battle against hundreds of X Borgs and dozens of Bruisers. After the demise of the X-Borgs, Tommy shook hands with Troy and teleported off along with Cassie and the Legendary Rangers.

Cassie was shown in archive footage, along with the other Space Rangers in Scrozzle's database when the villains were looking for a past villain to revive with the Reanimizer, and came across Psycho Red.

When all the Power Rangers' histories are split into pocket dimensions, the Space Rangers, unbeknownst to them are placed in their own. In the Astro Megaship the Space Rangers spend a free time making different activities. Cassie is seen playing cards along with T.J., she briefly seen the discussion of T.J. and Andros. However, they do not realize that they are being watched by Lord Drakkon, after when Drakkon kills Alpha 6, she's listening the calls of an emergency.

When Zordon and Alpha 5 patch Jen Scotts’s technology with Zordon’s teleportation technology and sends a warning across time and space to all the various Ranger groups, Cassie, Carlos and Andros morph into their Ranger forms are seen battling against Lord Drakkon and his Sentries, she is seen confronted by Drakkon and a Mastodon Sentry, she is killed by Drakkon.

Cassie's timeline was later restored by the Mighty Morphin Rangers after they defeated Drakkon.

When the Yellow Emissary observes all the Ranger realities, Cassie is seen briefly and the other Space Rangers in battle against the Psycho Rangers. She and Ashley made a combine attack of her Satellite Stunner and Star Slinger as a result defeated Psycho Pink and Yellow.

Cassie is a bit of a rebel. Her taste in clothes leans toward a slightly grunge-rocker style. She used to play guitar in an all girl rock band. Her attitude can get her in trouble, but she's not afraid to speak her mind. She also has a softer side and will do anything for her friends. Cassie is strong-willed and independent. She knows what she wants out of life, and knows how to get it.

She’s a 17-year-old Asian-American a bit of a rebel with a cause. Even though she’s defiant (wearing outrageous clothes and playing guitar in an all-girl rock band) she’s also goal-oriented and very loyal. Her taste in clothing is bold and she plays guitar in an all-girl rock band. Her somewhat defiant attitude often gets her into trouble, because she’s not afraid to speak her mind. She is also a good person who will do anything for her friends. Cassie knows what she wants out of life and is motivated about obtaining her goals.[1][2]

In Five of a Kind, Cassie, along with Andros, Carlos, and Ashley, disguised themselves as the Blue Space Ranger in an effort to fool Psycho Blue.

This form is exclusive to PRIS Episode 14 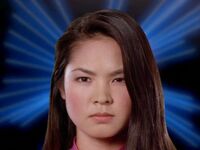 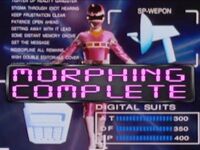 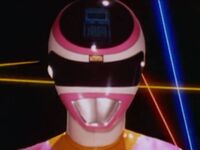 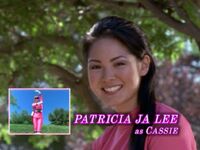 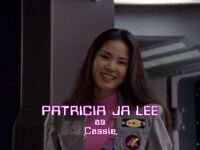