He is retroactively referred to as Red Jungle Fury Ranger - a variation of his in-show label. He is one of the guardians.

After being at the Pai Zhua Academy for a week, Casey witnessed Jarrod attack Master Mao which resulted in the box that contained Dai Shi to fall open. After being sent to Ocean Bluff with Lily and Theo, Casey and the gang met Robert James ("RJ" for short), the owner of the Jungle Karma Pizza. After witnessing RJ taking down an attack from the Rinshi, Casey, Lily and Theo were given the Solar Morphers which enabled them to transform into the Jungle Fury Power Rangers. Though his first attempt at morphing failed, seeing Fran in trouble helped Casey to channel his animal spirit and morph into the Jungle Fury Red Ranger.

When the Rangers decided to retreat after trying to fight the Five Fingers of Poison, Casey and the others get knocked off their feet and witness the arrival of Jarrod, the Rangers were shocked to learn that Dai Shi was controlling Jarrod with Casey saying that it was bad enough when he was a jerk at the school.

This angered Dai Shi, telling Casey that he'll pay for that humiliation. Casey decides to morph and fight Jarrod again, confident that he'll win since he beat him before. Unfortunately, Casey didn't took into account that Jarrod has the power of Dai Shi now, so he loses the fight and falls to the ground demorphed. Dai Shi decides Casey is not worth his time and send Stingerella forward who hits Casey with poison which was not lethal, but will cause Casey to be in a great deal of pain, as Dai Shi and his team vanishes, Theo and Lily race forward to the injured Casey and take him back to the base, where RJ says he's working on something new for Casey.

After Theo and Casey realized that Lily decided to fight Rantipede on her own, the two arrived right on time as the monster summoned several Rinshi. Casey then uses RJ's newest invention, the Strike Rider, to fight the army of Rinshis, with his new motorcycle and body armor he also manages to fight Camille in her chameleon form, defeating her quickly.

When was time for the students to take their Master's test, which consisted of them beating their respective master's in a fight, a stressed Casey asks RJ for guidance in this final test, but RJ says that from here on out the rest is up to him. As the test begins, Casey fights Master Finn and (due to being a little unsure) starts copying the moves that his friends do during their respective fights.

Thanks to that Casey figures out what he has to do to beat the Master and releases his tiger spirit, which proceeds to defeat the shark spirit of Master Finn. Casey was confident that Master Finn will tell him he had passed the test (as this was the case for Lilly and Theo) but instead Master Finn tells Casey he did not pass the test, Casey was upset, but Master Finn's word was final.

Later, while Casey is jogging in the woods, he finds Camille being rescued by Jarrod from the remaining Phantom Beasts, sent to assassinate her. This causes Casey to think that maybe there's still some humanity left in Jarrod and they might be able to liberate Jarrod from Dai Shi's grasp, but the others aren't as hopeful and have settled with simply destroying Dai Shi.

"No. I won't destroy you, Jarrod. You're a human, a Pai Zhuq student...and I care."
―Casey to Jarrod after beating him[src]

Casey eventually decides to defied Master Mao's orders and run thought the woods to find the temple of the Dai Shi. Casey reaches the entrance of the temple where there are several Rinshis, he destroys them with ease and finally enters the temple, where Dai Shi is waiting for him. Dai Shi is pleased that Casey had the courage to come and face him. Dai Shi roars at Casey, but Casey stands firm in his place and tells him that he has come as a friend.

Dai Shi attacks Casey as he tries to appeal to his human side but Jarrod yells that he is Dai Shi while they start fighting, Casey tells him that he had seen in the woods how kind he had treated Camille, Dai Shi knocks Casey to the floor and then dons his armor, Casey also morphs as they face each other and continue to fight, they knocked through some walls, but neither one gives up. The temple continues to get destroyed as the battle goes on. Dai Shi then powers up to his Rinzin armor and Casey powers up to his Jungle Master Mode. the Red Ranger and Dai Shi battle relentlessly and eventually Casey knocks Dai Shi to the floor making him lose his armor.

Despite Jarrod's demands Casey refuses to end him because he is human, Casey then demorphs, turns his back on Dai Shi and tells him to destroy him, Dai Shi is eager to destroy him, but he is unable to as Jarrod fights back, finally Dai Shi separates from Jarrod and punishes him for this. Camille tries to protect Jarrod but she is punished as well. Casey then releases his tiger spirit on Dai Shi and defeats him. Casey helps Camille and Jarrod to their feet and they take off, Jarrod thanks Casey, but the three are knocked off their feet by a blow from Generals Scorch and Snapper. The rest of the Rangers then appear to assist Casey and the others, Casey morphs, Jarrod and Camille don their armor and the battle begins.

TV STORY-Path of the Righteous

While training for the final battle, Casey realizes that the Rangers need Jarrod's help. Casey, Lily, and Theo go to the Pai Zhuq temple to talk to Jarrod and ask for his help, but Jarrod still feels responsible for all he's done as Dai Shi and declares that he will never call on the power of his Lion spirit again, Casey and the others then leave to assist the other Rangers and Masters against Scorch. The three Rangers defeat Scorch but their victory is cut short when Dai Shi opens up a vortex that resurrects all his fallen warriors, including the three Overlords.

Casey and the Rangers all morph, power up and call on their Masters' Spirit Ranger forms to battle the army. The four Pai Zhuq Spirit Masters come through the portal to assist the Rangers in this epic war where they were being outnumbered. The Order of the Claw manages to send the Beast Army back into the Spirit World. Unfortunately, Dai Shi appears and drains the Masters of their Spirits' powers, allowing him to reveal his giant eight-headed dragon form while he attacks the Rangers. Jarrod later decides to join in the fight and weakens the giant dragon in the process.

As Master Mao says that it is up to the three chosen protectors to destroy Dai Shi forever, Casey, Lily, and Theo create an energy blast of light that disintegrates Dai Shi and restores the animal spirit energies to the Masters. After the war is over, Casey took over as an instructor at the Pai Zhua School, teaching the ways of the Tiger while Jarrod and Camille are two of the students in the Beginner's Class, leaving the class to attend Dominic's going away party, Casey lets Jarrod to take over to teach the children the ways of the Lion.

Spirit of the Tiger

Six years later, Casey seemingly has become a zoo keeper while still teaching Pai Zhua. The Mega Rangers first see Casey tending to the tiger pit at the zoo, commenting on how he must be one with the tiger or that the tiger must be used to him being around as the tiger approached him without becoming hostile. While taking a break and grabbing a drink, Emma takes pictures of the zoo keeper, who puts on a coat with a cool symbol on the back.

While walking back from the zoo, Emma spots the same jacket being worn by a martial arts instructor at the park and asks him if he was the same person. Before they could talk any longer, their morphers go off and they rush into battle.

When they were thoroughly defeated by Pacha Chamak, Jake and Emma turn to Casey for martial arts lessons. After convincing him that he should teach them, Casey helps them summon their animal spirits before revealing that he is the Jungle Fury Red Ranger, and he knew that they were the Mega Rangers from the start.

After morphing into the Jungle Fury Rangers and summoning the Jungle Fury Zords to finish off Pacha Chamak, Jake and Emma take the other Mega Rangers so they can meet Casey and thank him. However, when they get there, they approach him only to find a man who looks similar to him who informs him that they never had an employee named Casey at the zoo.

As Troy talks about how proud he is of the Mega Rangers for their win, Jake sees the real Casey under a pavilion in his Pai Zhua uniform, getting Emma's attention as he bows to them and vanishing as they try to get the other Mega Ranger's attention.

Casey and the other Jungle Fury Rangers returned as part of the army of Legendary Rangers that helped the Mega Rangers defeat the Armada once and for all, fighting in a huge battle against hundreds of X Borgs and dozens of Bruisers.

COMIC STORY- Mighty Morphin Power Rangers 2018 Annual He was seen attempting to fend off the Ranger Sentries. He was later seen during the Rescue Mission in Lord Drakkon's Fortress, running to Promethea.

When the timeline was restored, so was Casey.

Casey received his Strike Rider relatively early on. It's not referred to necessarily as a Battlizer nor does it appear to fully envelop Casey as a Battlizer does. Unlike Battlizers, the armor only covers the top half of Casey's torso up to his shoulders. However, it does provide Casey with a special Red Ranger finisher just like a Battlizer would, And also only Casey has this mode.

Facing and succeeding against the challenge of Master Rilla, Casey is rewarded with a new power-up and is given his new master's spirit. The upgrade gives him more strength and a limited range of levitation by means of jets built into the suit. 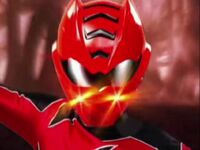 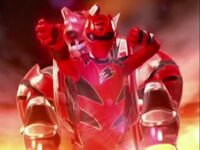 A female version of the Jungle Fury Red Ranger as seen in Super Megaforce.