RangerWiki
Register
Don't have an account?
Sign In
Advertisement
in: Turbo, In Space, Ranger,
and 21 more
English

A Drive to Win

"You'll be the new Green Ranger Carlos, you've proven yourself to be decisive and intelligent."
―Adam appoints Carlos as his successor to the Green Ranger powers[src]

Carlos was at first a recurring character during the Turbo era. He was a beginner player on a soccer team that the then-Green Turbo Ranger, Adam Park coached. However, he was proud as a player and hot-tempered. When the veteran Rangers chose to move on with their lives, Carlos was chosen by Adam to become the new Green Turbo Ranger, taking over control of the Desert Thunder Turbozord and later gaining access to the Thunder Loader Rescuezord.

When the Power Chamber was destroyed by Divatox and the defeated Power Rangers Turbo received word that the planet Eltar, home to the Power Rangers' mentor Zordon, had fallen to evil forces, Carlos and the other three current Turbo Rangers - T.J., Ashley, and Cassie - left Earth for outer space in a NASADA space shuttle, powerless but ready to fight to save Zordon.

At the beginning of Power Rangers in Space, Carlos and the other Rangers then met Andros, the Red Space Ranger, on the Astro Megaship, and he was given new powers as the Black Space Ranger, commanding the Mega V2 (Shuttle) Zord. Carlos then became serious and introverted.

While on the Astro Megaship, he stumbled on a video clip of Andros' sister, Karone, being captured and taken away. He followed Andros to KO-35 to keep an eye on him, as the Red Ranger was searching for his long lost sister. However, Ecliptor intervened and Carlos took a powerful laser blast that was meant for Andros. Carlos had later recovered and offered to help in finding Andros' sister along with their search for Zordon.

TV STORY-Never Stop Searching Carlos had gotten stung by an alien Barillian Bug, which transformed him into a humanoid Barillian Bug. While terrorizing the Astro Megaship, he managed to sting Cassie, which turned her into one as well. Ashley and T.J. managed to reverse the effects with the antidote, returning them to normal.

When Carlos felt like he was making mistakes as a Power Ranger, he received help from Adam to be trained hard, so it would not happen again; even going as far as to learn how to fight by relying on his instincts rather than his vision.

Carlos' identity as a Ranger was exposed to young Silvy Larson, who blackmailed him to do everything that she wanted for her. However, when she asked for a moon rock, Carlos had enough and left. But Carlos realized how much a moon rock meant to Silvy and got her one.

When Dark Specter's Universal Conquest began, Astronema sent her Quantron and Piranhatron armies to Earth. As the Rangers fought the foot soldiers, it proved to be too much for them to handle. In an effort to save the people of Angel Grove, Carlos and the Space Rangers exposed themselves as the Power Rangers. They had won the battle against Astronema as well as all of Dark Specter's armies. Once he and the other Rangers brought the people of KO-35 home, Carlos returned to Earth with the other Rangers.

Carlos was seen in archive footage, along with various Rangers and villains, when Austin St. John and Walter Jones related about the Power Rangers' team from Mighty Morphin until the recently Lost Galaxy.

The Return of the Psycho Rangers

After when Andros, Leo, and Mike were planning to rescue the other Galaxy Rangers, the Space Ranger Carlos alongside T.J. , Cassie and Ashley enter the Astro Megaship. Alpha 6 is shocked when he finds that they're taking the Astro Morphers from the vault. The four remaining Space Rangers have appeared, ready to help.

Everyone morphs, he fought Psycho Blue alongside Damon ,the Green Galaxy Ranger, during his battle against Psycho Black, which was a hand-to-hand battle, Carlos because of his experience in combat and also his past battles against Psycho Black, Carlos and Damon both easy defeated Psycho Black in combat. Carlos and his teammates whip out the Spiral Saber Booster Mode and Quadro Blaster, and fire at the Psycho Rangers. The Galaxy Rangers follow it up with an Orion energy attack. The team celebrates back at the Megaship with Alpha revealing that he called Andros and the others to help out. The Space Rangers decide to stay for a while and see the sights on Terra Venture.

The Galaxy Rangers show off the Galactabeasts to their new friends, the Space Rangers. Cassie tries to dance on the Wildcat Galactabeast's head and gets kicked out because of her trouble. Kendrix Morgan radios the Rangers for help, but the appearance of Deviot, Villamax, and some Stingwingers slow them down.

As the remaining Space Rangers, including Carlos and the Galaxy Rangers, fight them off and learn that Psycho Pink's plan has succeeded, Carlos and the other Rangers immediately leave for Rashon. The Astro Megazord and Galaxy Megazord finish off Psycho Pink with a powerful slash from each of their respective swords. The Rangers arrive but it is too late. As the storm recedes, they are greeted by her spirit form, who tells them that she will always be with them.

The spirit disappears and the Pink Quasar Saber flies through the sky to places unknown, the time has come for the Space Rangers to go. When Kai says that his and his friends mission is to protect Terra Venture, Carlos response that he and the other Space Rangers had a mission, expensive expresses that things would have ended differently, he and the other Spacer Rangers seen that how Cassie is still heartbroken over Kendrix's death, but Andros tells her that she sacrificed her powers to save the Astro Morpher for her. She sadly says goodbye and they fly away in their Galaxy Gliders.

Carlos is seen again in a flashback by Damon and Leo, remembering the Psycho Rangers were the worst enemies. Even though they survived their attack with help from the Space Rangers, the memory of losing Kendrix comes as a bitter reminder of the danger they face, even as Karone continues to fight in her stead.

In the tropical-themed bar called "Bulkmeier's", Bulk is bragging to Skull about how he once met Lord Zedd and Rita Repulsa, while they were playing with Psycho Ranger and Space Ranger's chess pawns, including a Chess pawn similar to the Black Space Ranger, later they receive Andros' call.

Carlos was featured in a chronicle of Power Ranger history compiled by Tommy Oliver shortly after he formed the Dino Rangers, which was found by the nascent Ranger team in the Dino Lab.

Carlos along with his fellow Space Rangers and other Ranger teams are seen in Troy's premonition about the Legendary Battle.

Emperor Mavro was defeated, but the remaining thousands of X Borgs still stand. Tommy gathered all the existing Power Rangers, Carlos returned with his fellow Space Rangers as part of the army of Legendary Rangers led by Tommy that helped the Mega Rangers defeat the Armada once and for all, fighting in a huge battle against hundreds of X Borgs and dozens of Bruisers. After the demise of the X Borgs, Tommy shook hands with Troy and teleported off along with Carlos and the Legendary Rangers.

Carlos was shown in archive footage, along with the other Space Rangers in Scrozzle's database when the villains were looking for a past villain to revive with the Reanimizer, and came across Psycho Red, when Robo-Blaze deems that Psycho Red is the perfect candidate but Robo-Roxy is not so sure. She recalls that Psycho Red’s obsession over Andros led to the Psycho Rangers' destruction as the footage of the Psycho Rangers being destroyed by both the Space Rangers and Galaxy Rangers is shown.

When all the Power Rangers' histories are split into pocket dimensions, the Space Rangers, unbeknownst to them are placed in their own. In the Astro Megaship the Space Rangers spend a free time making different activities. Carlos practicing boxing, he briefly seen the discussion of T.J. and Andros. However, they do not realize that they are being watched by Lord Drakkon, after when Drakkon kills Alpha 6, he's wakes up listening the calls of an emergency.

When Zordon and Alpha 5 patch Jen Scotts’s technology with Zordon’s teleportation technology and sends a warning across time and space to all the various Ranger groups. Carlos , Cassie and Andros morph into their Ranger forms are seen battling against Lord Drakkon and his Sentries, he is seen confronted some [[Mastodon Sentries|. According to Andros, he is killed by Drakkon.

Carlos and the rest of the Space Rangers are mentioned by Andros, when he explains to Jason and Lauren how he got here and what happened to his team. He also says that T.J. was taken by Lord Drakkon’s forces out in space when they were preoccupied on the Astro Megaship.

Carlo's timeline was later restored by the Mighty Morphin Rangers after they defeated Drakkon.

Carlos along with T.J. and Andros are seen briefly during a battle against Psycho Blue, Psycho Black and Psycho Red in a fragment of the reality when the Emissaries Three observes all the Ranger realities.

In his first appearance, Carlos was a proud and hot-tempered soccer player whose only focus was to be the star player of his team and win. He showed no interest in teamwork until Ashley and his coach Adam encouraged him to show some. Over his time as a ranger in both of his series, he showed plenty of growth and responsibility. He also became a more loyal and caring individual.

Carlos is a kind, handsome and outgoing student who can sometimes be stubborn. Raised in a very strict Mexican-American family, he appreciates their rules and values, even though he doesn’t always agree with them, at 17, he is the youngest of four children. Carlos is a good student and is Angel Grove’s star soccer player. He also happens to be every girl’s idea of a dream date.[1][2]

In Five of a Kind, Carlos, along with Andros, Ashley, and Cassie, disguised themselves as the Blue Space Ranger in an effort to fool Psycho Blue.

The Barillian Bug is a scorpion-themed alien Carlos is temporarily transformed into. A Barillian Bug was able to infect Carlos and he slowly turned into one himself. While in this form, Carlos stung Cassie, but later reverted back to his original form via an antidote.

This form is exclusive to PRIS Episode 14 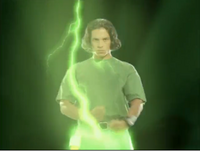 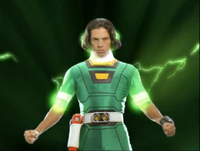 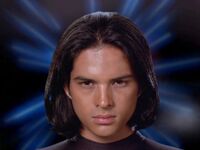 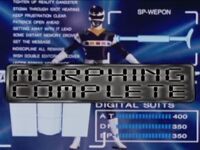 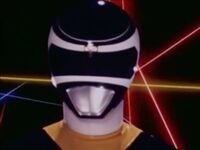 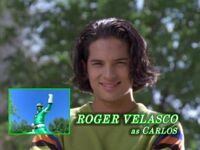 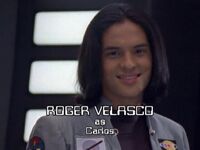