Cameron "Cam" Watanabe is the son of Sensei Kanoi Watanabe and the late Miko Watanabe, nephew of Lothor, and cousin of Marah and Kapri. When he traveled back in time, Cam was given the mystical Samurai Amulet, which allowed him to morph into the Green Samurai Ranger.

Cam is the cynical, sarcastic, but intelligent son of Sensei Kanoi Watanabe, the head of the Wind Ninja Academy, the nephew of Lothor and cousin to Kapri and Marah. Though his father never allowed him to become a ninja himself (something he was frequently annoyed by), he was often at the academy where his father taught, acting as a mentor for the other students, being the most skillful.

After the academy was sucked into the sky by Lothor and his minions, he took the three remaining students (Shane Clarke, Dustin Brooks and Tori Hanson) into a high-tech underground dojo. Under instruction from his father, who had been turned into a guinea pig, he presented three Wind Morphers to the students, allowing them to become the Wind Rangers.

Throughout the series, he used his brilliant intellect to construct power spheres, Zords and weapons for the Rangers to use in battle. For example, when his father was captured by the Thunder Rangers, Cam created a powerful force-field to protect his father. After the two Bradley brothers joined the team, it was Cam that discovered the mystery piece in their Megazord that would allow the Storm Megazord to combine with the Thunder Megazord. However, he was still troubled by his father's stubborn refusal to let him become a Ranger himself. When Shane, Dustin, Hunter, and Blake realized this, all of them argued on Cam's behalf, thinking that he should be a Ranger.

When the Rangers lost their powers temporarily, Kanoi revealed to Cam that his mother had made him promise not to let Cam become a ninja, due to a ninja's dangerous life. However, still conflicted by his promise, he revealed that there were other powers that Cam could use instead. On his father's advice, he used the Scroll of Time to travel to the past. Once in the past, he encountered a younger version of his father when he was ambushed by him. Cam found himself laughing at the fact that his father was a bit pushy even back then. The Sensei of the Wind Ninja Academy did not suspect Cam as Kanoi did, and allowed Cam to enroll into the Ninja Academy for a short period of time.

In the past, Cam found out that his father had a twin brother, Kiya. He was at first shocked that his father would keep such a secret from him. The shock of finding out he even had an uncle subsided when his father faced off against a mystery samurai during a demonstration of swordsman skills. Kanoi was beaten easily, and the sensei of the Wind Ninja Academy revealed that the new coming samurai was Miko, Cam's mother. Miko, after defeating Kanoi, became the first female student to enroll at the Wind Ninja Academy.

Cam became fast friends with his mother (though he did not reveal their connection), and she said his mother's decision would have changed if she saw the kind of young man Cam was now. Cam saw that his mother possessed a green amulet with special powers and suspected this was the power he was sent to obtain. However, Kiya, who was power-hungry, tried to steal it by framing Cam as the thief by wearing clothes similar to Cam's, which was all Miko saw when she confronted the thief. Before Cam's judgement was carried out, Kanoi arrived and claimed Cam was innocent. He held Kiya before the sensei and revealed his brother had been practicing dark ninja arts. Kiya used his new dark powers in his attempt to escape and get the amulet, but the amulet shifted in the air and landed in Cam's hands. Cam and Kiya grabbed wooden practice swords and dueled in a one-on-one swordfight, and Cam emerged the victor when the amulet augmented his strength to counter Kiya's dark powers. Cam witnessed Kiya's banishment from the Academy, at which point Kiya forswore his family name and took on the name Lothor. Despite Cam's protests, the sensei stated that they would only banish the newly-christened Lothor, because of the sins he had committed in the present, not the future they cannot see.

Before Cam could explain, the time scroll re-opened. He tried to hand the amulet back to his mother, but she told him that Cam was its rightful owner when it unleashed power during his duel with Kiya. Cam brought the amulet back to the present and used it to morph into the Green Samurai Ranger.

As the Samurai Ranger, he helped the others fight Lothor's evil, still shocked by the discovery that Lothor was in fact his uncle. He created a holographic "virtual" duplicate of himself called "Cyber Cam" to take over day-to-day running of the dojo and maintenance of the equipment. Cyber-Cam was given an "urban" persona - wearing skull caps, speaking in slang, and being highly skilled in extreme sports.

When Lothor was finally defeated, Cam once again became an adviser at the Wind Ninja Academy, helping the other Rangers in their instructor duties - and keeping a special watch over Marah and Kapri, Lothor's nieces who had turned good.

The Green Samurai Ranger was included in a chronicle of Power Ranger history compiled by Tommy Oliver shortly after he formed the Dino Rangers, which was found by the nascent Ranger team in the Dino Lab.

Cam later briefly regained his Samurai Powers and teamed up with his fellow Ninja Rangers as well as the Dino Rangers to battle the combined forces of Lothor and Mesogog, in which he teamed up with Trent Fernandez-Mercer. Cam then lost his powers again, this time permanently.

After an alien from Andresia named Orion came across a Silver Ranger Key and a Morpher, Orion would call out the powers of all the Sixth Ranger, including Cam, in order to create the Super Megaforce Gold Key for Orion. He also appears in the Legendary Final Strike during the second phase of the attack, attacking through the enemy with his Samurai Saber.

Cam returned with his fellow Ninja Rangers with his powers somehow restored as part of the army of Legendary Rangers that helped the Mega Rangers defeat the Armada once and for all, fighting in a huge battle against hundreds of X Borgs and dozens of Bruisers.

Receiving Zordon's call through the Morphin Grid, Cam was among the Rangers who rallied to his pocket dimension for the last stand against Lord Drakkon.

After having his Morpher reinforced by Doctor K, Cam took part in a mission to Lord Drakkon's fortress to rescue captured Rangers, and was subsequently aboard the Promethea when it was trapped in an unknown dimension known as “The Void”.

Trapped on the Promethea for over 4 weeks, Cam engaged in a mission with other morph-capable Rangers to find life aboard on an unknown vessel and then find a mysterious Ranger who stole power from Promethea.

Cameron as Green Samurai Ranger and Green Solar Ranger is among the Rangers who feature in Power Rangers Legacy Wars,he is a Legendary (Leader), Legendary (Assist) character, and represents Ninja Rangers alongside Tori,Blake and Hunter. 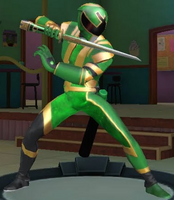 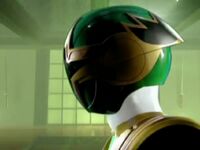 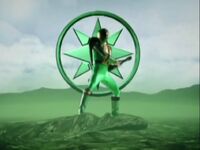