A Kabutomushi Confrontation Ki Soldier that came to life thanks to Kata's Confrontation Ki and assist Rio in his search for the other Fierce Beast-Fist users. The Confrontation Beast Beetle-Fist (臨獣ビートル拳, Rinjū Bītoruken) style that relies on an armored body and a horn-shaped long spear has been input into it. Though destroyed by Super GekiYellow, Butoka is recreated as a giant and is the first to do battle with GekiFire, smashed to bits. A Fury Confrontation Machine Soldier version is created by Maku to wreak havoc on the city until it is destroyed by GekiTohja Wolf.

After the revival of Saidain and it's triumph over the Sky Fist Demon Kata. A Rinshi who has constantly getting loses the Chamber of Trials pledge it's beg to Mele to give it the chance to become a Rinrinshi. However,Mele refused since it didn't had means to make her do so.Therefore,she suggested that it should find something that can bribe with her.

The lone Dropout Rinshi has thought some ways to get something that can bribe with Mele,such as robbing jewelry shops and banks,through it rejected them since it considered that it may get it behind the bars.However,after witnessing Elehung's precious gem on the hands of the Three Thieving Sisters,it set it sights on the gem and had a skirmish with the thieves.Later, a passing by Retsu who was on his way to find the gem,casually defeat the Rinshi and send it to the sky,though it managed to survive afterwards.

The Rinshi returned to Confrontational Beast Hall and sneak in the chamber of Butoka to equip one of the armor for itself,though it has trouble to put on the helmet.Then Mele scold not to do so and slam his head through the helmet,unintentionally help it the put on the helmet.

Butoka is merely a set of armor,so it has no will of itself. 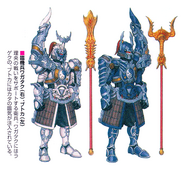 His staff, along with Wagataku, would be used as weapons for the Leo Dustards