Acha and Kocha are servants of whoever rules over the Machine Empire Baranoia.

Butler Acha (執事アチャ, Shitsuji Acha): Baranoia's Imperial Family Butler who follows whoever is in command at the time. He read the War Declaration to Earth in Episode 2. Took care of young Buldont when in the field, even serving as the producer of his movie. When Bomber the Great took over, he simply forgot about Empress Hysteria and served him. When Buldont returned, the same happened, Acha couldn't care less about Bomber. At the end of the series, he turned good and went with Kocha, Buldont and Multiwas' son, and Gunmajin back to Gunmajin's planet. His motif is the one of a lightbulb.

Butler Kocha (執事コチャ, Shitsuji Kocha): A miniature robot who served the family along Acha. She was always on her bigger male counterpart's shoulder like a pirate captain's parrot. In episode 8, an enlarging beam for the Machine Beasts was installed in her. In the series finale, she was taken by Gunmajin back to Gunmajin's home planet. Her motif is the one of a weighing scale. 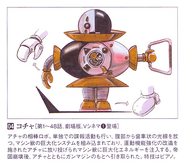