The Build Ressha (ビルドレッシャー, Birudo Ressha) is the personal mecha of ToQ 6gou in Ressha Sentai ToQger, that transforms into Build DaiOh.

The Build Ressha is comprised of two orange construction trains. The first train is a track maintenance train comprised of an engine based on a railroad shovel, a railroad crane, and a caboose. The second train is an unorthodox train, as it is a middle section that connects two tank threads which both end in dozer-like plows. The second train carries the first train by default, forming a double decker train.

It can attack during vehicle mode with its bucket head smashing foes left and right, and ramming them with the double decker size of the train.

The Build Ressha was found by Akira. When he enters the cockpit and sees that the Ressha needed some modification, he decided to take the responsibility. After modifying the Ressha, the cockpit was filled with wires for the controls, and Akira would later need help from the ToQgers to control it.

TV STORY-Station 19: Now Departing! Build-Dai-Oh After a short while, Akira edited the mechanics of the train so that he can manage the Mecha form all on his own.

He would later make his living inside the Ressha, as the cockpit is seen filled with house appliances and hung laundry.

Ressha Gattai Build DaiOh (烈車合体ビルドダイオー, Ressha Gattai Birudo Daiō, Ressha Combination Great Build King) is the Giant Robo mode of Build Ressha and the personal Giant Robo of ToQ 6gou. The back Ressha fold the threads down, turn them to the left, and fold the dozers to form the legs. The front and back Ressha of the first train fold down to become the arms. The crane atop the front Ressha turns to the left and becomes the mecha's head.

Build DaiOh's cockpit is complex. The mecha's movement depends on a series of pulleys and levers, each being responsible for a specific limb. Alone ToQ 6gou has semi-complete cockpit-based control over this mecha. However, Build DaiOh's maximum control and performance require simultaneous manipulation of the levers (something ToQ 6gou is unable to do, as a few of the levers are out of his reach). Other people in the cockpit with him, like the other ToQgers, play a vital role in Build DaiOh's performance, as they can operate the controls that ToQ 6gou cannot. The cockpit was later modified in order to allow ToQ 6gou to operate Build DaiOh on his own.

Build DaiOh's primary weapon is the Build Shovel mounted on its right arm which it wields like an extended claw. Its finisher is the ​Bucket Break, where it charges orange energy into the Build Shovel and performs a devastating upward swing.

A more powerful version was the Hyper Flying Rolling Bucket Break where it's eyes flash and it flips multiple times through the air as the background becomes a red and gold gradient. It would then perform it's Bucket Break although the Build Shovel would be charged up with red energy instead, slashing three times with the final hit being three diagonal claw slashes. This was only used once in Station 44 against the Castle Keeper Pawn because the regular Bucket Break

15,400,000
Build DaiOh Drill (ビルドダイオードリル, Birudo Daiō Doriru): The result of the combination of the Build DaiOh and ToQ 6gou's first and secondary mecha, the Drill Ressha. During Build DaiOh's debut, the Drill Ressha had been stolen and used by an ordinary Kuliner train-mecha. However, the Kuliner's destruction allows the ToQgers to steal the Ressha back and combine it with Build DaiOh.

40,600,000
Cho Cho Ressha Gattai Cho Cho ToQ-DaiOh (超超烈車合体超超トッキュウダイオー, Chō Chō Ressha Gattai Chō Chō Tokkyū Daiō, Super Super Ressha Combination Super Super Great ToQ King) is the combination of ToQ-Oh, Diesel-Oh, and Build DaiOh - this formation is a nine-Ressha combination. Making its first appearance in Station 23, it was formed when the ToQgers were enveloped in Darkness Fall, they then established their bravery and determination to come back home in front of darkness and fear, and with Akira combined all available Ressha into CCTDO. When combining, the threads become "shoes" for Cho ToQ-Oh, the torso and head of Build DaiOh go between the head and body of the original formation, the crane piece on Build DaiOh's head attaches to the head of Cho ToQ-Oh to form a visor, and the arms of Build DaiOh combine and connect with the Railway Crossing Sword, with the shovel section folding out, to form the Shovel Crusher.

While the ToQgers were being tossed left and right by Empress Gritta's and General Scwarz's Kuliners, Cho Cho ToQ Dai-Oh faced no issue when it fought them and easily bested them. It can travel into battle via Build Ressha's back train threads forming special foot treads, channel energy into the Shovel Crusher (ショベルクラッシャー, Shoberu Kurasshā) for slashes, and fire the Cho Cho ToQ Super Cannon (超超トッキュウスーパーキャノン, Chō-Chō-Tokkyū Sūpā Kyanon) blue light beams from its breast area, which are able to incapacitate Gritta's Kuliner.

Its finisher is the Cho Cho ToQ Dai-Oh: Imagination Express (超超トッキュウダイオー・イマジネーションエクスプレス, Chō-Chō-Tokkyūdaiō Imajinēshon Ekusupuresu), where Cho Cho ToQ-DaiOh slashes with the Shovel Crusher 3 times (twice diagonally and once straight down), each accompanied by energy manifestations of the ToQ-Oh, Diesel-Oh, and Build DaiOh lines. 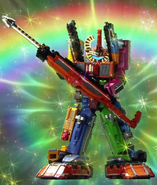 n/a
Build Dai-Oh Tank (トッキュウオータンク, Birudo Daiō Tanku) is the formation where Build Dai-Oh is armed with the Tank Ressha on its forearms, replacing the front and back of Build Ressha. This formation allows Build Dai-Oh to throw fast punches with impressive power that can be likened to a professional boxer.

Build Ressha (Cho ToQ Ver.) (ビルドレッシャー(超トッキュウver.), Birudo Resshā (Chō Tokkyuu bājon)) is an enhanced version of the Build Ressha, exclusive to the ToQger DVD Special, that was created from Ticket's ToQ 6gou form. Akira uses it to transform into Cho ToQ 6gou, a enhanced form of ToQ 6gou which allows him to perform a powerful Yudo Breaker finisher which defeats General Schwarz and Kaniros.