Buffalo Nezire was a monster of superhuman strength created by Yugande to destroy the Megarangers.

A dummy of the superstrong Nezire was sent by Yugande to record the data on the Megarangers using the gem on its head, which survived the dummy's destruction and was inserted into the real Nezire Beast later in the same episode. Using it, Buffalo Nezire could deflect any attacks the Megarangers tried to inflict on him, including the DrillSniper Custom and Multi-Attack Rifle. His arrival signified the arrival of Mega Silver, whose moves were not archived by the dummy so the real Buffalo Nezire's barrier shattered, as it couldn't counter MegaSilver's attacks. He was taken down by MegaSilver's finisher, the Blazer Impact. then, He grew giant, facing Galaxy Mega. The robot soon found itself being outclassed as easily as the Megarangers on ground had been by the buffalo monster, so they called upon the Delta Mega to assist. The two mechas combined to become the Super Galaxy Mega, and the tables turned quickly; Buffalo Nezire became outmatched, and was finally silenced by the Super Galaxy Mega's Super Galaxy Knuckle finisher attack. 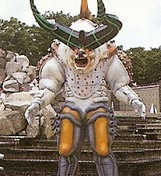 Real Buffalo Nezire
Add a photo to this gallery

Retrieved from "https://powerrangers.fandom.com/wiki/Buffalo_Nezire?oldid=927030"
Community content is available under CC-BY-SA unless otherwise noted.