"Who drew on me?"
―Brick Bully's first lines after being created[src]

Another Brick in the Wall
Master Vile and the Metallic Armor, Part 3
Alien Rangers of Aquitar
King for a Day

The Brick Bully was a brick monster created by Rita Repulsa. He could absorb stone, making himself stronger and turn people into bricks. He serves as the main antagonist of the episode "Another Brick in the Wall".

Brick Bully was created by Rita. Rita wanted to return Katherine to the side of evil and blasted in her from her staff with evil spell, but she missed and got into the wall, reviving it and turning into the monster Brick Bully. This monster could turn people into the bricks. He encountered the Power Rangers. Rangers morphed, but they lost the fight and Brick Bully turned Tommy, Aisha, Adam and Rocky into the multicolored bricks. Katherine and Billy returned to the Command Center with them. And Alpha discovered that accelerated erosion could cause the bricks worn dawn and free the rangers. Alpha created pollution device to free his friends. Brick Bully also could eat stones. He devoured a large amount of build material and transform into the second more powerful form. Then he attacked Angel Grove again. Billy went to battle the monster. Billy encountered the monster and fought him on the bridge. He defeated the villain by distracting him from eating stone and Brick Bully fell on the ground. Then Rita enlarged him. Billy summoned Blue Shogunzord and fought him. In the battle monster used a spear and nearly defeated Billy, nearly making the Blue Ranger's Zord explode. However, Billy eventually defeated Brick Bully by throwing him on the ground and destroyed him with his staff. .Another Brick in the Wall

Brick Bully's second form is among the monsters that attend Master Vile's End of the World party.Master Vile and the Metallic Armor

Brick Bully's second form was later seen as an audience member in Prince Gasket's Machine Arena.King for a Day

He was possibly destroyed again by Zordon's Energy Wave.

Brick Bully was nasty and sneaky monster, that enjoyed devouring stone and turning people into the bricks. He was shown somehow sadistic as he turned most of the Rangers into the multicolored bricks. But he was also loyal to Rita, Master Vile, Professor Longnose and Prince Gasket. 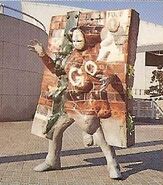 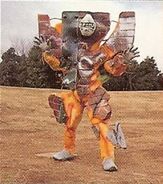 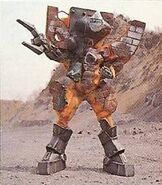 Resurrected
Add a photo to this gallery

Retrieved from "https://powerrangers.fandom.com/wiki/Brick_Bully?oldid=831195"
Community content is available under CC-BY-SA unless otherwise noted.