Brave 8: Where Are We? Break Through the Depression

Where Are We? Break Through the Depression (ココドコ？めいろをぶっとばせ, Kokodoko? Meiru wo Buttobase?) is the eighth episode of Zyuden Sentai Kyoryuger. It marks the first appearance of the Igeranodon Zyudenchi.

Nobuharu must figure out how to properly split his priorities between his family and his job as one of the Kyoryugers, all the while Debo Kokodoko attacks.

While his teammates are at the Tiger Boy, Nobuharu reluctantly accompanies Yuko and Rika to an amusement park. As Yuko stresses the importance of being a family unit, Rika wanders off. Meanwhile, Torin's search for Pteragordon brings him to the amusement park where Nobuharu is. As Nobuharu and Yuko search for Rika, they come across some random people who are unusually sorrowful and wandering seemingly aimlessly. Suddenly, they find themselves in a forested mountain range, and Yuko herself unwittingly joins the ranks of the melancholy when sees an image of her late husband, Kenichi. Nobuharu realizes that everything around them is an illusion. When Nobuharu tries to break Yuko from the thrall of the illusory Kenichi, he is attacked by the illusion's creator, Debo Kokodoko. Nobuharu transforms into Kyoryu Blue to fight Kokodoko and the assembled Zorima, but is suddenly transported inside a haunted house. His transformation cancelled and unable to contact the other Kyoryugers for help, Nobuharu is forced to hide. He eventually escapes the haunted house and finds Rika, who is unaffected by Kokodoko's illusions. Nobuharu deduces that Rika's immunity stems from her acceptance that Kenichi has passed on. The other Kyoryugers finally make contact with him as Ian and Souji try to take down the barrier that Kokodoko put up around the park. Aigallon, who had been trying to harvest the sadness of those grieving over departed loved ones, arrives to try to stop the Kyoryugers from ruining his plans. Kyoryu Red and Kyoryu Pink hold off the Zorima off while Kyoryu Black and Kyoryu Green enlist Rika's help to try to break the barrier. Meanwhile, Nobuharu catches up to a tearful Yuko and confronts "Kenichi" with the first "oyaji" joke that he told to him. When "Kenichi" responds negatively, Nobuharu exposes him as a fake, reminding Yuko that the real Kenichi loved his "oyaji" jokes. Yuko realizes that Nobuharu is right and laughs as Nobuharu regales her with more "oyaji" jokes. Yuko's laughter breaks Kokodoko's illusion, and she faints once she and Nobuharu are back in the forest. Now that Yuko is safe, Nobuharu transforms and takes on Kokodoko. Kyoryu Green and Kyoryu Black, with Rika's help from inside, break down the barrier, freeing all those trapped inside Kokodoko's illusion. As the parkgoers, including Yuko, run to safety, the Kyoryugers take out the Zorima. Kyoryu Blue uses the Igeranodon Zyudenchi in combination with the Stegotchi Zyudenchi to defeat Kokodoko. However, the victory is short lived, as Pteragordon arrives and attacks the Kyoryugers. The Kyoryugers form Kyoryuzin Western to try to snap the wild Zyudenryu back to its senses. As Torin realizes with horror that Pteragordon is in Battle Mode, Luckyuro enlarges Kokodoko to support Pteragordon. Kyoryuzin Western takes on both adversaries at the same time, causing Kokodoko's destruction and Pteragordon's retreat. Dogold seethes as he vows to fully master the Zyudenryu. Later at the Tiger Boy, Yuko has made peace with Kenichi's passing, but despite admitting to a fleeting moment of gratitude towards Kyoryu Blue for rescuing her, she is still contemptuous of the sentai hero, stating that he is probably a loser in his forties, whose "oyaji" jokes are worse than Nobuharu's. Rika, Daigo, Amy, Ian, and Souji try hard to stifle their laughter as a vexed Nobuharu tries to refute Yuko's assertion. 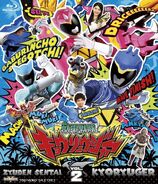 Kyoryuger Volume 2, Blu-ray cover
Add a photo to this gallery

Retrieved from "https://powerrangers.fandom.com/wiki/Brave_8:_Where_Are_We%3F_Break_Through_the_Depression?oldid=823209"
Community content is available under CC-BY-SA unless otherwise noted.