Brave 4: Shoot Through! The Gaburivolver of Courage

Missed Shot! The Gaburevolver of Courage (うちぬけ！ゆうきのガブリボルバー, Uchinuke! Yūki no Gaburiborubā) is the fourth episode of Zyuden Sentai Kyoryuger. It marks the first appearance of the Kentrospiker and Kyoryuzin Western.

After Ian is attacked by Debo Doronbosu, he remembers how he lost his old friend before becoming a Kyoryuger.

Reaching the Spirit Base, Torin tells the Kyoryugers that they may need the Kentrospiker Zyudenchi, but it is mysteriously missing before alerting the group to Debo Doronbosu as he was about to rob a painter's scenery. While they face Debo Doronbosu, Kyoryu Black arrives and uses the Kentrospiker Zyudenchi that he stole with the Gaburevolver, but the recoil proves too much for Kyoryu Black to handle as it sends him and Kyoryu Red crashing into a car as Debo Doronbosu runs off. Later, while telling the others they may need to work together, Daigo confirms Kyoryu Black's identity to be Ian as he condescends Daigo's naive nature, before taking his leave.

However, Daigo follows and gets Ian to open up and reveals how he was a treasure hunter until the day his best friend Shiro Mifune was murdered by a cloaked figure resembling Debo Doronbosu when they were looking for a rare stone. Knocked off the cliff, Ian was saved by the Zyudenryu Parasagun and has since vowed to avenge his friend. Telling Ian that unless he shoots he would still regret the event, Daigo joins the others as they face Debo Doronbosu to give their Zyudenchi time to recharge. However, Aigaron and Luckyuro join the fray with the Deboss Army overpowering the Kyoryugers until Ian arrives and manages to save Daigo from Debo Doronboss's hold by taking the shot.

After being thanked in Ian's way, Daigo declares their team finally complete as they assume their Kyoryuger forms and combine their personal weapons with Kentrospiker Zyudenchi into the Kentrospiker and destroyed both Debo Doronbosu's cloak and the Debo Monster. But after Debo Doronbosu is enlarged, Kyoryu Black summons Parasagun before it combines with Gabutyra and Zakutor to form Kyoryuzin Western and destroys the Debo Monster. Though the stone he and Shiro were looking for is nowhere to be seen, Ian considers the other Kyoryugers his friends and vows to protect them.

At the Frozen Castle, Aigaron laments the loss of the cloak he gave to Debo Doronboss, as it is revealed that the hooded figure who killed Shiro and stole the stone he and Ian were looking for was Aigaron.

First appearance of the Kentrospiker

Parasagun receiving it's Zyudenchi
Add a photo to this gallery 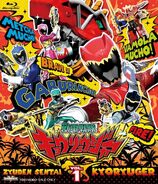 Kyoryuger Volume 1, Blu-ray cover
Add a photo to this gallery

Retrieved from "https://powerrangers.fandom.com/wiki/Brave_4:_Shoot_Through!_The_Gaburivolver_of_Courage?oldid=851078"
Community content is available under CC-BY-SA unless otherwise noted.