It Can't Be Dad! Silver's End (うそだろオヤジ！シルバーのさいご, Uso Daro Oyaji! Shirubā no Saigo) is the forty-fifth episode of Zyuden Sentai Kyoryuger. It features the death of Torin and the debut of Dantetsu as Kyoryu Silver.

With 50 hours left until Deboss destroys the Earth, the Kyoryugers hope that with Dantetsu on their side they still have a chance. But they soon discover that the Deboss Army has a new human ally.

Unable to wait for Dantetsu, the Kyoryugers arrive at the Frozen Castle before they transform to face Chaos, Endolf, and the new knights. Torin entrusts Souji with the Feather Edge. The Frozen Castle suddenly transforms into Deboth, with Kyoryu Silver and Gigant Bragi-Oh ready to fight the monster as he begins evolving. Though it seems that Gigant Bragi-Oh has defeated Deboth, it turns out that the monster only assumed the form to eject a fragment containing Deboss' mind to complete his evolution into fully evolved human-like Transcendenterfly God form. Proving himself to be much faster and more powerful than his last state, the Kyoryugers are defeated by Deboss who then enlarges to defeat Gigant Bragi-Oh.

Though he has the power to do so, Deboss refrains from killing Torin at the last second as the traitor needs to die by the hand of his new ally: Dantetsu. Dantetsu uses his pipe to weaken Torin as Endolf and Chaos reveal that they have made a pact with the human so that he can kill Torin for them in return for the planet being spared. Though Daigo refuses to accept this as the truth, he and the others are forced to watch Torin be killed by his father's hand. Dantetsu explains that he has heard the Earth's true melody and is acting on it, but Daigo refuses to accept his father's new ideals. After taking the Giga Gaburivolver, Dantetsu transforms into Kyoryu Silver and overpowers Kyoryu Red before defeating the Kyoryugers.

As Deboss takes his leave, the Zyudenryu arrive to battle the enlarged Endolf and the new knights. As the others cope with the turn of events, Deboss honors his promise to Dantetsu while telling Chaos that Luckyuro and Candelilla must be destroyed before they become a threat like Torin became. Aigaron overhears this and is formally introduced his and Candelilla's replacements, Sorrowful Knight Icerondo and Joyful Knight Killborero, as he flees for his life.

Later that night, Daigo hears the Earth's melody and remembers that he was exposed to it as a baby. He resolves to find out the truth of his father's actions. 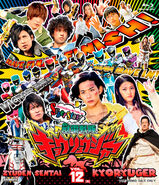 Kyoryuger Volume 12, Blu-ray cover
Add a photo to this gallery

Retrieved from "https://powerrangers.fandom.com/wiki/Brave_45:_It_Can%27t_Be,_Dad!_Silver%27s_End?oldid=823246"
Community content is available under CC-BY-SA unless otherwise noted.