Dantetsu arrives back in Japan to give Daigo a special stone to give to Torin, who has seemingly been brainwashed by the Deboss Army.

Finding Candelilla as she attempts to win a pop star contract with an agent, Endolf recruits her to aid him in a scheme. Elsewhere, while looking for a troubled Torin, Daigo ends up meeting his father and is given a bag of amber stones. Revealing to Daigo that Torin is in Valley of Calming Winds, Dantetsu asks his son if is he ready to believe in Torin. Finding Torin, Daigo learns that their mentor is a friend of his father yet could not get Torin to reveal what he is hiding.

Torin senses as Debo Karyudosu attacking, with Kyoryu Red joining the others. However, for his reasons unknown, Dogold reveals that the attack to be a distraction as Endolf has captured Torin by having Candelilla sing a dark version of her Joyful Song that is affecting their mentor.

Arriving to watch Torin's wing get cut off before Chaos, the Kyoryugers fight Endolf and Debo Karyudosu while Kyoryu Red battles Chaos before Torin suddenly starts attacking them as Candelilla's song started playing. Defeated by Torin as he begs them to run away from him, the Kyoryugers learn from Chaos that Torin is actually a member of the Deboss Army who betrayed their creator, and is also Chaos' younger "brother".

Summoning Luckyuro, Chaos borrows the Sukusuku Joyro and gives it to Endolf to enlarge Torin so the Kyoryugers could not deny the truth. While the others were shocked, Daigo remembers his father's words and tells the others to form Kyoryuzin to save Torin from his pain while Kyoryu Gold attempts to take a Shukushuku Ball. But during the fight, Torin regain enough control of himself to force Kyroryuzin's sword through his body. 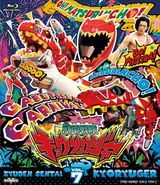 Kyoryuger Volume 7, Blu-ray cover
Add a photo to this gallery

Retrieved from "https://powerrangers.fandom.com/wiki/Brave_28:_Oh_Torin!_The_100_Million_Year-Old_Grudge?oldid=823229"
Community content is available under CC-BY-SA unless otherwise noted.