Daigo asks for a second chance to be allowed in the Kyoryugers after Kyoryu Gray has his membership revoked, and is given a chance to prove himself worthy.

Though the others come to his hospital bed to see how he is faring since their last fight with Debo Nagareboshi, Daigo is actually on top of the building pondering Kyoryu Gray's words. Daigo is visited by Torin, who explains that Kyoryu Gray is the first Kyoryuger and fought his feelings of fearing for his loved ones over the years. At that time, Kyoryu Gray jumps Daigo and beats him in a fight while explaining that he is a fearless fool. Before leaving, Kyoryu Gray gives him the chance to prove his worth to him at the Dusk Forest.

Once at the Dusk Forest, Daigo encounters an illusion of Debo Nagareboshi before it turns into Kyoryu Gray who knocks him into the river. Upon coming to, Daigo encounters a fisherman who tells him that those who have no fear are foolhardy. Remembering Torin's words about Kyoryu Gray, Daigo goes back up the mountain where he encounters the illusion of his father and then realizes his fear as the illusions disappear just as his friends arrive. The reunion is short-lived when Torin reveals that Utsusemimaru has been defeated by an even stronger Debo Nagareboshi and is now being held captive by him and Dogold. However, Kyoryu Gray impedes the Kyoryugers' path so Daigo can finally prove himself worthy. Upon managing to crack Kyoryu Gray's helmet, Daigo reveals that his fear is losing the friends he has made as a Kyoryuger.

With Daigo having proven his worth, Kyoryu Gray lets him pass to save Utsusemimaru. During the ensuing fight, while Kyoryu Gold defeats Dogold and the others take out the Zorima, Kyoryu Red manages to disarm Debo Nagareboshi before finishing him off with the Kentrospiker. When Debo Nagareboshi is enlarged, Kyoryuzin Macho finds itself unable to fight. The fisherman appears once more, revealing himself to be Tessai as he transforms into Kyoryu Gray and gives Kyoryu Red the Bunpachy Zyudenchi.

With Bunpachy joining the fray, Kyoryuzin Macho exchanges Dricera for the new Zyudenryu to become Kyoryuzin Kung-Fu and overwhelms Debo Nagareboshi before destroying him. Later, noting that Kyoryu Gray left without saying goodbye, the Kyoryugers intend to make use of his teachings to put their feelings into his attacks.

Back in China, welcomed back by Kyoryu Cyan, Kyoryu Gray tells Cyan that Plezuon will soon reveal itself as the two depart to find the final Zyudenryu: Bragigas. 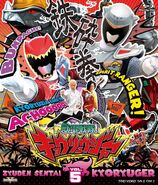 Kyoryuger Volume 5, Blu-ray cover
Add a photo to this gallery

Retrieved from "https://powerrangers.fandom.com/wiki/Brave_18:_Caught!_Kung-Fu_Finishing_Strike?oldid=887952"
Community content is available under CC-BY-SA unless otherwise noted.