Ian and Utsusemimaru help Souji gain enough courage to ask out Rin, his school's kendo club manager. However, Debo Jakireen, who destroyed people's happiness by breaking bonds, appears to mess everything up.

After tying with Utsusemimaru in kendo, Souji introduces him, Daigo, and Amy to Rin Katsuyama of his school's kendo club. As Souji leaves for school with her, Utsusemimaru notices a letter that Ian confirms to be a love letter from Rin to Souji as the two decide to help Rin by dressing as delinquents. However Amy, not in on the ruse nor recognizing Ian and Ucchi, intervenes with Rin thinking that she is Souji's girlfriend and that Ian and Utsusemimaru are screwing with her, and she beats them up, sending them running. At that time, Kyoryu Red and Kyoryu Blue intercept Debo Jakireen with the former affected by the Debo Monster's Relationship-Cutting Shears. Luckily, Kyoryu Blue damages Debo Jakireen's scissors as he and Aigallon are forced to retreat.

Nobuharu and Daigo formulate a plan to lure Debo Jakireen back to destroy him for good. Elsewhere, after Luckyuro restores his Relationship-Cutting Shears, Debo Jakireen sees Rin as she, Ian, and Utsusemimaru find Souji with Amy. Heartbroken as she slaps Ian, Rin runs off but Souji catches up with her to clarify things while explaining that he owes his friends a lot for opening himself up to others. But before Rin can admit her feelings to him, she falls under Debo Jakireen's influence as she gains yandere tendencies and attempts to strangle Souji. However, with Daigo posing as a school girl and Nobuharu as a hopeless student, Debo Jakireen falls for their trap as Utsusemimaru destroys the Debo Monster's scissors to restore Rin's sanity.

Intending to make Aigaron pay, Kyoryu Green defeats Debo Jakireen with Kyoryu Gold's help. Formed to fight the Giant Zorima, Kyoryuzin finds itself overwhelmed when an enlarged Jakireen joins the fray before Pteraiden-Oh evens the odds as it combines with Parasagun and Zakutor to become Pteraiden-Oh Western. As Kyoryuzin destroys the Giant Zorima, Pteraiden-oh Western finishes off Debo Jakireen. As school comes to an end, Souji gives Rin a present that Amy was helping him find that day as his way of thanking her. However, Souji also gives a similar present to Rin's friend, making Rin lose her temper at Souji's obliviousness to love and chased him. 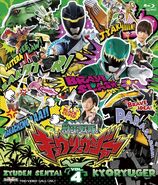