Amy introduces Utsusemimaru to modern living while Candelilla takes to the stage once more with Debo Honenukky.

After Utsusemimaru finally released from Dogold, he suddenly refused to join the team with the reason of no respect. In Debos hideout, Chaos creates a new monster to be used for Dogold body. Looking at Utsusemimaru act, Torin feel sad and wondering what happened to him, but Ramirez told him to not worry because Utsusemimaru will finally join them eventually. Ramirez also told to him that they must be alert for the eighth Zyudenryu, which is about to be found in the coming days.

Not for long after his talk with Ramirez, Torin feels the attack of the Debos army and the Kyoryugers (5-members) found them in a studio. Amy, looking at the singer quickly noticed that she is Candelilla. Right when Kyoryugers attack them, the hypnotized fans created by Candelilla attack Kyoryugers. However, Daigo, Nobuharu, and Amy make the quick work of them using Guruminote, Igeragodon, and Stymero to make the fans faint. Candelilla and the others bait Kyoryugers to the outside to fight Honenukky. When Ian, Nobuharu, Souji, and Amy fight him, Bonespiner proved too tough for them until Utsusemimaru come in aid. Ian, Nobuharu, Souji, and Amy admit Utsusemimaru's strength on their own profession. After the Deboss flee, Utsusemimaru mocks the Kyoryugers and it makes them (except Daigo) angry. Amy chased him with DeinoChaser and found him in the middle of park, surprised to see how Utsusemimaru exactly feels, sorry for himself. Utsusemimaru, surprised by being followed, apologizes to Amy and begs her not to tell the others.

Amy and Utsusemimaru have a talk with eating ice cream. Utsusemimaru tells her how delicious is the ice cream for him and why he tries to avoid the others because of what he has done in Dogold's body. Amy told him to not worry about it because Daigo will definetly forgive him. But Utsusemimaru also said that he has another problem and that is Daigo, he resembles to his former lord. He remembers his former lord's dying word because protecting him from Deboss army cheat attack about always be careful from his kindness because it was his weakpoint. Amy feels sorry for him and told him that she would do the same thing as him if she watched a kid being kidnapped. Utsusemimaru feels happy to listening that word and thanked her. Utsusemimatu also tells her for the next time not calls him Utsusemimaru and in exchange Amy makes her own call for him Utchi.

Meanwhile, Nobuharu while searching for Candelilla and her army getting hypnotised due to Candelilla's undercovered trick. When Amy told the others about how to stop Candelilla's attack suddenly Nobuharu is coming with a weird clothes and vow his love to Candelilla. Tighting the others and the men get in Honenukky's hypnotize attack. Amy doesn't received the effect due to Hunenukky's admittance that he is bad with woman even too shy to touch them. Amy runs quickly and calls Utchi for help.

Amy has a hard time in fight due the distraction of the other members being hypnotized. Luckily, Utchi comes but the Bonespineless managed to hypnotize attack him. Unfortunately, Bonespineless attacks doesn't give the effect due Utchi has the same act as him to woman. Amy quickly finds the way to recover the others by telling Utchi to destroy the pot that the enemy carries. Utchi managed to destroy and recovered the others. When he is happy, suddenly Amy reminds him to be strict. Utchi mocks the men and makes a teamwork with Amy, finally destroying Honenukky.

At the Kyoryugers hideout the men feel regret too much with what happened. Amy tells the others that Utsusemimaru isn't a truly bad person. Ian and Souji swear themselves to become stronger and mock him back one day. Nobuharu feels weird on how cheerful Amy is. Amy receives a message from Utsusemimaru, asking how are things going. She replies with the word "perfect", which Utsusemimaru does not understand. However, he thinks the word means something good, and it makes him happy. Utsusemimaru feels his day will be better soon in the end. 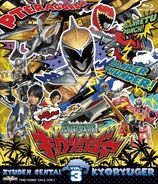 Kyoryuger Volume 3, Blu-ray cover
Add a photo to this gallery

Retrieved from "https://powerrangers.fandom.com/wiki/Brave_11:_Utchi!_How_Cool?oldid=823212"
Community content is available under CC-BY-SA unless otherwise noted.