These monsters were apart of a boot camp run by Divatox presumably training to battle the Turbo Rangers.Fire in Your Tank 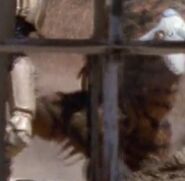 "Blue Grouperhead"
Add a photo to this gallery
Retrieved from "https://powerrangers.fandom.com/wiki/Boot_Camp_Monsters?oldid=732032"
Community content is available under CC-BY-SA unless otherwise noted.