RangerWiki
Register
Don't have an account?
Sign In
Advertisement
in: In Space, PR Monsters, In Space Monsters, Cyborgs

Invasion Of The Body Switcher

" I can change your image to anything like this! "
―Body Switcher's first words after being summoned by Astronema.[src]

"That's an easy one."
―After Astronema tells him to turn her into the Yellow Ranger.[src]
"Time to make a big change!"
―Body Switcher after growing giant.[src]
"Whoa!"
―Body Switcher's last words before his demise.[src]

He had the ability to change his image to any person or monster, he made Astronema look like Ashley to help her to infiltrate the Astro Megaship and destroy the other Rangers and captured Ashley and made her look like Astronema. After the chaos that ensued was solved, Body Switcher fought the Mega Voyager and was destroyed. 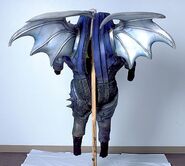