The Blue-Head Krybots are the elite robotic foot soldiers of the Troobian Empire, servants of Emperor Gruumm. The Emperor's personal guard, and while less common than the normal Krybots, they are smarter and more powerful. This Krybot usually has an army of normal Krybots at its disposal.

They were all destroyed in Endings part II during their raid on the Delta Base along with the Orange-Heads and standard Krybots.

They are known to carry an x-blade weapon. Like their names suggests, they have blue breastplates and heads. The Blue Krybots also wield laser blasters and sometimes swords. They are summoned from spherical devices that resemble their heads. Blue-Heads are capable of jumping at extremely fast speeds and high reaches.

Blue-Heads typically lead an squad of several dozen standard Krybots. In larger Troobian forces, a larger amount of Blue-Heads fight alongside hundreds of standard Krybots, both types are led by Orange-Head Krybots. Should a Blue-Head fail the Emperor, he will destroy them, reducing them to a small metal chip, then turning that chip into a fresh new Blue-Head.

In order for the Terror Spacecraft to travel through a wormhole to Earth, a Proton Accelerator was needed. Emperor Gruumm sent a Blue-Head to acquire one on Earth. It travelled to Earth where it hunted down an alien in possession of it, but not before the alien gave it to Jack Landors and Elizabeth Delgado, saying that the future of the planet depended on it.

Having not found it, the Blue-Head didn't know who had it. When Sky Tate, Bridge Carson and Syd Drew confronted Jack and Z to arrest them. As they prepared to contain them, the Blue-Head interrupted them and summoned his army of Krybots. As Jack and Z fled, the Blue-Head ordered his cohort to attack the remaining trio. After a brief battle, the team morphed into the Blue, Green and Pink S.P.D. Rangers. The tables turned in favour of the Rangers but turned back again when the Blue-Head dazed them with a laser blast. As the Krybots moved in, Jack and Z arrived and knocked out the Blue-Head. The Rangers then destroyed the Krybot army, the Blue-Head retreated back as what he was looking for wasn't there. He went back to the Terror Spacecraft where he announced his failure to the furious Emperor Gruumm. He levitated the Krybot up, saying that as he brought him back nothing, he would be turned into nothing. Gruumm reduced him to a tiny metal chip, and then turned the chip into a fresh new Blue-Head, ready for orders.

He went to Earth and confronted the Rangers, now joined by Z, the Yellow Ranger. They fought him 4 on 1, despite being outnumbered, he fought well against them. Eventually, he summoned an army of Krybots to turn the tide. Surrounded, the four Rangers were saved by Jack, who completed the team by morphing into the Red Ranger. Once the Krybots were dealt with, Jack destroyed the Blue-Head with the Delta Blasters. (Beginnings)

During the two full scale invasions of Earth, many Blue-Heads fought alongside hundreds of standard Krybots and several Orange-Heads. They first served under Broodwing's command, laying siege to the Delta Base and fighting the SPD cadets. After Broodwing was defeated, the Krybots fought in Omni's invasion of Earth. Omni was soon destroyed and Gruumm was arrested. (Endings) 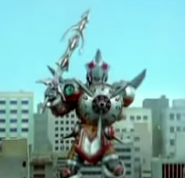 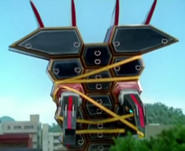