Blake Bradley is Hunter's brother, and the Navy Thunder Ranger.

Not a lot is known about Hunter and Blake Bradley's early years, except that they were both adopted at a young age by the Bradleys, a young couple who were also members of the Thunder Ninja Academy. It seems that both Bradleys shared a content childhood with their adoptive family, until they were later murdered by the fallen Wind Ninja, Lothor. Hunter and Blake unfortunately are unaware who is responsible for their deaths until years later. Following the death of their family, the boys continued to live at the Thunder Ninja Academy, now being raised by Sensei Omino. Blake and Hunter trained at the Thunder Ninja Academy under Sensei Ominou who was later captured along with the whole academy by Lothor. Sensei Ominou, knowing that the world needed protectors he gave Blake and Hunter the Thunder morphers.

He also has a crush on Tori, the Blue Wind Ranger, which, while "obviously mutual", was never acted upon (most likely due to the show's targeting a younger audience).

Lothor made them believe Sensei Watanabe was their adopted parents' murderer after he captured them, making Hunter and Blake go against the Wind Ninjas. However, their parents' spirits told them it was Lothor who killed them. After that, the Thunder Rangers allied with the Wind Ninjas and fought alongside them during many battles. It is implied that he has feelings for the Blue Wind Ranger, Tori Hanson. In "I Love Lothor," he and Cam were put under a spell and fell madly in love with Tori. By the end of the series, they know of each others' feelings but a relationship is not confirmed, likely since the show was targeted to children. Ironically, his Sentai counterpart also had feelings for the Blue Wind Ninja Sentai counterpart.

After the end of Ninja Storm, Blake achieved his dream of becoming a motocross star.

The Thunder Rangers were featured in a chronicle of Power Ranger history compiled by Tommy Oliver shortly after he formed the Dino Rangers, which was found by the nascent Ranger team in the Dino Lab.

After almost a year, Blake unlike his brother Hunter who becomes head instructor of the rebuilt Thunder Ninja Academy, Blake becomes a Professional Motocross Racer. At Hayley's Cyberspace, Blake meets Kira, he gives her tickets for her and her friends to go see his race in the Reefside park.

In the Reefside park Blake wins his motocross race, while he is watched by Conner, Ethan, and Kira. After his race, Blake tries to spend time with Kira, Conner and Ethan, however, he is contacted by Cam receiving his message, due the situation is important, he leaves the place.

When he is contacted by Cam, Blake realized that Lothor finally manages to escape from the Abyss of Evil. Posing as Sensei Watanabe, he returns Shane, Tori, and Dustin their Wind Morphers which he then uses to brainwash them with evil power discs. They recapture the students of the Wind Ninja Academy.

Blake appears with a Ninja Streak at the indicate point of the reunion, he expresses seeing Hunter his brother and Cam again after a year, the three watch the fight from above. They watch as the Wind Rangers and Lothor's forces beat the Dino Rangers. The Dino Rangers decide to regroup.

Cam, Hunter, and Blake enter the Abyss of Evil in search of their powers, when they enter in the Abyss of Evil, seeing that the Samurai Amulet is being guarded by Zurgane, Bald Loser, Blue Face and several Kelzaks. Starting a fight, Blake like the others fight against Lothor's forces, during the fight Blake easily use efficient attacks against Bald Loser and some Kelzaks.

When Cam was about to grab his Samurai Morpher, Zurgane execute an attack causing an earthquake in the Abyss of Evil, Blake was falling and when Zurgane and his troops leave, Blake is helped by his brother by holding onto the stone pillars of the abyss, preventing them from falling, while Cam tries to help them. Fortunately, the real Sensei Kanoi Watanabe helped Hunter, Blake, and Cam and recover their Ninja Ranger powers. There they find and keep the good Ninja disks, for to give Shane, Tori and Dustin and escape the Abyss of Evil with Sensei.

In the Hubble Bridge, Shane, Tori, and Dustin have a duel with Dino Rangers Conner, Kira and Ethan unmorphed, when there were about to turn into their Ranger forms, Blake Hunter and Cam appear tricking and making them to believe that they joined Lothor's Army. But they trick them into taking the right Power Discs, which reverses Lothor's spell, Shane, Tori and Dustin return to the good side.

Back at the Dino Lab, the other Rangers listening on how Hunter, Blake, and Cam explain that Sensei came to their rescue just in time. All the Rangers are ready to take down Lothor. Tommy and Sensei remind them that this won't be easy and they will have to try their best.

The Dino Lab's screen shows the Lothor and Mesogog's army, deducting that Lothor forms an alliance with Mesogog, all the Rangers going to the battlefield.

The Ninja Rangers and Dino Rangers morph into their Ranger forms and prepare for the battle. Blake and Hunter team up with Tommy the Black Dino Ranger against Zurgane, surrounding and damaging him. The three Rangers again attack Zurgane together, however, Blake like Hunter and Tommy receive Zurgane's thunder explosion. When Tommy was about to receive Zurgane's attack, Blake protects Tommy using his Thunder Shield, while Hunter attacks Zurgane with his Crimson Blaster, Tommy attacks with an energy orb to Zurgane, as a result, together the Thunder Rangers and Tommy destroyed Zurgane.

Blake along with the other Ninja Rangers and other Ranger teams are seen in Troy's premonition about the Legendary Battle.

After the apparently death of Vrak, Hunter is seen briefly with the other Rangers in Troy's premonition about the Legendary Battle.

Emperor Mavro was defeated, but the remaining thousands of X Borgs still stand. Tommy gathered all the existing Power Rangers, Blake and his brother returned with his fellow Ninja Rangers and his powers are somehow fully restored, as part of the army of Legendary Rangers led by Tommy that helped the Mega Rangers to defeat the Armada once and for all, fighting in a huge battle against hundreds of X Borgs and dozens of Bruisers. After the demise of the X-Borgs, Tommy shook hands with Troy and teleported off along with Blake and the Legendary Rangers.

The Thunder Rangers are not present in the crowd of Legendary Rangers used for original footage in Legendary Battle. They do, however, appear in the Sentai footage due to their counterparts indeed fighting in the Legend War.

Blake ventually received Zordon's call through the Morphin Grid and was among numerous Rangers who rallied to his pocket dimension led by the Quantum Ranger for the last stand against Lord Drakkon, reunited in the Command Center.

During the battle on the moon of the World of the Coinless, Blake and the rest of the Ninja Rangers (except Cam) driving the Storm Megazord they grouped with the other Rangers piloting their respective Megazords; Wild Force Megazord, Dragonzord Battle Mode and Shogun Megazord as they confront the evil Zord Serpentera. However, they are killed by the evil Zord.

Blake's timeline was later restored by the Mighty Morphin Rangers after they defeated Drakkon.

Blake as Navy Thunder Ranger is among the Rangers who feature in Power Rangers Legacy Wars, he is a Legendary (Leader), Legendary (Assist) character, and represents the Ninja Rangers alongside Tori, Cam and Hunter. 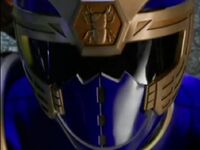 A female version of the Navy Thunder Ranger as seen in Super Megaforce.