The Crimson Sun! The Invincible FiveRangers

"Our invasion is all that is left...There will be no resistance! Attack, kill, plunder! Our motto is destroy and slaughter. After we completely destroy the nations's society...we can begin the world of our Black Cross Army."
―The Black Cross Führer rallying his subordinates.[src]

"How?! How can I be defeated?! I was born out of years of grudge! How?!"
―Black Cross Fuhrer (as Black Collossus King)'s final words before his permanent death.[src]

The Black Cross Führer is an alien being who came to Earth from a star within the vicinity of the constellation Casseiopeia. His purpose on Earth was to conquer it, having created the Black Cross Army with minions and Masked Monster androids, for this goal and purpose.

The Black Cross King initially leads attacks in secret through wearing a cloaked white hood from the initial attacks until the arrival of Volcano Mask General Magman, when he reveals his true form. The Black Cross Fuhrer usually holds back within the Black Cross' headquarters, leading the Masked Monsters and hearing of their schemes, or later hearing the schemes and aspirations of the generals who work for the Black Cross on his global conquering campaign. Prior to this, the Gorenger and even Commander Gonpachi Edogawa attempt to find out what he really is without any success.

Originally he is extremely deadpan in his presentation but later he shows more expression when speaking with his leaders, particularly Commander-in-Chief Golden Mask who is his most loyal follower. While he appears to be masculine, the Fuhrer is a master of disguise, even appearing once as a bilingual woman in order to lure the Gorenger away to prevent them from stopping a plot to invade the Japanese island of Shikoku.

Whilst underground or hidden in another base like Magman's Navaronne fortress early in the series, he eventually reveals the powerful flying craft known as the Black Cross Castle which he and Golden Mask use on occasion to launch powerful attacks against the Gorenger and Japan from the skies.

During an astrological phenomenon revealed by Golden Mask where the constellation of Casseiopeia enters the house of Scorpio which weakens the Führer, the leader finally decides to face the Gorengers to eliminate their threat once and for all. He proves himself to be invulnerable and invincible to the heroes, easily crushing them and preparing to kill Tsuyoshi before the effects of Casseiopeia in Scorpio weaken him and force him to withdraw whilst using the final sacrifice of his most loyal general to carpet-bomb Tokyo and destroy the Gorenger's headquarters. On discovering this weakness, Tsuyoshi Kaijo decides to confront the Führer with nothing more than a simple suitcase in appearance of a final surrender before the team and the world are crushed. When the leader opens the suitcase to see what was inside it, it reveals five diodes in the shape of the constellation, making the Führer weakened. The Gorenger use this to launch a final assault, creating a Gorenger Hurricane which formed into a flaming version of the Casseiopeia constellation that hits the Black Cross leader and forces him to retreat. However when he returns to where he was hidden, he suddenly transforms into the Black Cross Castle, revealing himself as the massive flying headquarters all along. With the Fuhrer at his weakest, the Gorenger launch a final assault, sacrificing Varidreen and the New Gorenger Machines to blow up the castle whilst they all escape with their Birdies. The castle is torn apart in mid-air, bringing an end to the Black Cross Fuhrer and his Black Cross Army once and for all.

The Black Cross Führer is one of several past Super Sentai villains that appear in clips in the anniversary special Hyakujuu Sentai Gaoranger vs. Super Sentai.

Forty years later, the Black Cross Fuhrer ressurects himself using the hatred of defeated Super Sentai villains and forms an alliance with the Space Empire Zangyack in order to have his revenge on all Sentai and those who support them. He also revives several of the Sentai warriors' enemies, Brajira, Yogoshimacritein, and Dagon, to battle against the Gokaigers and Goseigers. He gets his hands on the Ranger Keys of the past 33 Sentai teams and uses it to turn the Super Sentai into his personal army to anihilate them. After the Ranger Keys are recovered, he grew into a giant only to be defeated by the Super Sentai Bazooka created by the spirit of all the Super Sentai teams. However, he reveals himself to be his true fortress monster form, the Black Cross Colossus which is an enhanced version of his castle form. He easily overpowers GokaiOh, Gosei Great and Gosei Ground in this form. However the spirits of the past 33 giant mecha appear to fight him and his revived servants. After the Gokaigers are given the Gorenger's Greater Power in the form of the Variblune, they combine GokaiOh and Variblune to create Goren GokaiOh which leads to Black Cross Colossus' destruction thanks to the Gokai Hurricane Cassiopeia. All that the Black Cross Collosus can do is express horror at his defeat despite being made by all the hatred before being obliterated.

THe Black Cross Fuhrer revives again together with the other villains of the past Super Sentai as a part of Dai-Zangyack. During the final battle. he is seen fighting GingaRed and VulEagle and is presumably destroyed by them.

An iteration of the Black Cross King is amongst the Shocker

bonus stage. This army is ultimately wiped out by a combined force of Sentai Rangers and Kamen Riders, with the Black Cross King being destroyed along with multiple footsoldiers by Kamen Rider Brave

When ©Na replaces the Super Sentai Series with her own Super ©Na Series, she appears as Black Cross Queen ©Na in her original seires which also lasted 84 episodes.

A sword which the Führer uses as a weapon, using it to nearly kill Akarenger during the final battle.

In the out-of-continuity Super Hero Taisen Otsu net movie, the Black Cross King, as the "King of Terror", used the same cannon to destroy the Earth, leaving the world in ruins. 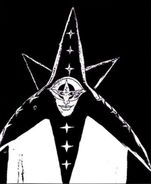 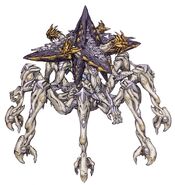