The Black Box is a Morpher and the most powerful device in the entire Samurai Rangers' arsenal. It is a magical and technological talisman that can combine the symbol powers of all of the Samurai Rangers.

The Black Box was created by the first Red Samurai Ranger but was unable to complete it. The Rangers recognize how much using the Black Box can drain them but eventually decide to retrieve it from Daisuke at The Tengen Gate. Daisuke claims that it was the most powerful Samurai weapon ever conceived and that few even know of its existence. Ji, recognizing Antonio's symbol power and symbol hacking skills, asks him to complete it using his Samurai Morpher to channel the other rangers' symbol power into it. Antonio then merges all of the existing Samurai powers at the time into the box. With it, one Samurai Ranger can take on all the powers and access Super Mode, a mode strong enough to kill mutated Arachnitor with ease.

In Super Samurai Mode, the Samurai Rangers gain super speed, reflexes, and leave afterimages. When combining that with their respective Power Discs, they can shoot a supercharged version of their elemental attack. The Black Box then attaches to the Spin Sword magnifying its power. It cannot attach to the Barracuda Blade, so Antonio cannot use it himself. Being as there is only one Black Box, only one Ranger may use it at a time, similar to the Defender Vest from Operation Overdrive.

Exclusive to the game, super samurai.

With Super Mode activated, once the rangers call on their zords, the ranger with the Super Mode accesses Super Mega Mode while the rest access Mega Mode. The Black Box then attaches onto the hinge of the Super Mode ranger's Mega Blade while in controller mode. When the need arises to use the sword mode in cockpit, the Black Box is moved to the offset section of the Mega Blade's hilt. This adds an extra layer of white armor onto their Mega Mode costumes. The Black Box also allows a single Ranger to control the Zords of another Ranger not in combat or a Zord combination such as the Samurai Battlewing. 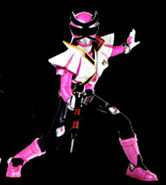