"Like I say, never send a bat to do a bird's job! "
―Birdbane angered after the Batlings only got regular eggs.[src]

"You pesky Rangers are ruffling the wrong feathers."
―Birdbane after being stop by Carter.[src]

Birdbane is a crow demon and the king of all airborne demons who is one of the many monsters to be summoned by Jinxer. He serves as the main villain of the episode "The Great Egg Caper".

When a egg that contains a powerful monster gets stolen by a thief, Jinxer is in desperate need for help, so he summons a monster to help him find the egg. He unleashed Birdbane, a crow-like monster to find the egg, but the monster hits Jinxer by accident when he was summoned. Jinxer was worried due to the fact that he ended up with a "cuckoo bird" and not a warrior, but Birdbane calmed him down by reminding him that "he's the king of all airborne demons". He first had the Batlings look in a store, but he was angered to find out that they only found ordinary eggs. The Rangers confront them and tricks the bird monster into saying what the egg does. He then boasts of how he'll get the egg first before papers fall from the sky and notching the fate of the egg if they don't bring $20,000, they rushed back to get money. Birdbane and his army of Batlings (in their human forms) came in with a case of money. A toy helicopter with an egg in the net came, the thief tells them to put the money in the trash can, but after doing so it was revealed to be a trick, as the egg was really a ball. Furious at being tricked, he morphs back into his true form along with his Batlings and sends them to stop him. He was going to aid them until he was stopped by Carter (who along with the other Rangers were in disguise). While Kelsey goes out to help the thief, the other Rangers took on Birdbane. The monster was a tough opponent and had the upper hand, until the Yellow Ranger came to the rescue, but Birdbane was still too powerful. He was about to finish them off until the thief came in and threw the egg back at the monster, who turns around. The Rangers used this as a perfect chance to use the Rescue Bird's Unilaser on Birdbane, destroying both him and the egg. Jinxer (who is angered by the egg being destroyed) came by and blasted the thief before using an Advanced Growth Card to make Birdbane grow into his advanced form, where he gains a helmet and new shoulder pads. The Rangers summon the Supertrain Megazord to battle Birdbane and try to use the Turbine attack on him, but it had no effect and the monster made a beatdown on it. When Birdbane was close enough, the Rangers used the Gatling Blasters on him, damaging his armor. With the monster weakened, the Rangers used the turbine attack again to destroy Birdbane once and for all.

Birdbane has a very eccentric personality and tends to have a sense of humor. He does tend to speak in a bunch of gibberish, but when it comes to fighting, he takes it very serious and will stop at nothing to get the egg back. He is also loyal to Jinxer. 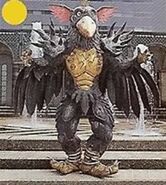 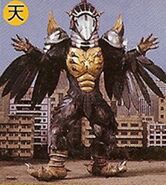 Birdbane transformation
Add a photo to this gallery

Retrieved from "https://powerrangers.fandom.com/wiki/Birdbane?oldid=1031937"
Community content is available under CC-BY-SA unless otherwise noted.