At Christmas Time shortly after Damaras was killed, Dyrandoh meets up with him on Earth while Emperor Ackdos Gill prepares a new method of conquering the planet. With two Dogormin Bodyguards, the duo start Bibaboo's doll transforming spree as part of their "fun" until the Gokaigers find out. Among the people he's turned into dolls is Seiji Kinoshita and Gai Ikari, the latter who took the shot to protect the boy's sister Sayo from being turned into a doll herself. One the other Gokaigers join the way, the four Zangyack members do battle. Bibaboo fights Gokai Green and tries to turn two more Gokaigers into dolls, only to hit the two Dogormin instead, forcing to reverse the process and expose his reverse ability. But before the Biba Stick could be taken, Dyrandoh takes the Gokaigers down with his Giant Hammer to aid in their escape.

As the other Gokaigers encounter the duo again, Luka pulls off a gambit to get the wand from Bibaboo and restore everyone to normal. As the others fight Dyrandoh and his Dogormin, Luka uses a fake out doll made by Sayo, knowing Bibaboo wouldn't fall for it and turn her into a doll, so that Sayo can use her Gokai Yellow mode. The surprise allows Sayo to reverse the dollification before Gai breaks the Biba Stick to keep him from doing it over again. The Gokaigers first use an all yellow warrior transformation to take down the Dogormin. When Bibaboo detransforms the Gokaigers back to their default mode, the prime five Gokaigers then use the Battle Fever Keys to assume their form while Gokai Silver borrows the Gokai Red and Green keys to assume the newly fused Gokai Christmas form with the two combining their forces with the Pentaforce Cannon and the Gokai Christmas Slash, they manage to destroy Bibaboo and drive Dyrandoh off.

Enlarged alongside the Dogormin duo, Bibaboo threatens Christmas, but GokaiOh and GoZyuJin are formed and while GoZyuJin deals with the Dogormin while Bibaboo is attacked by the same Greater Power mecha used in the previous battle with Damaras. Engine Machalcon and Furaimaru destroy the Dogormin duo while the mecha form Kanzen GokaiOh to destroy the Action Commander with the Gokai Kanzen Super Burst, causing him to explode into glitter.. 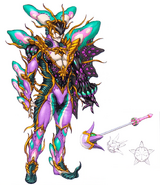