The Beast-X Megazord is the combined Megazord form of the first three Beast Zords combined. The heads of the Beast Bots form the control panels for the Megazord and other combined forms. It is formed by typing 'BXMZ' into the keypad of each individual Zord.

The Beast-X Megazord wields the Beast-X Blade that is formed from the Racer Zord's sword and the Chopper Zord's rotors, allowing it to use the Beast-X Blade Blast, which launches two orange-yellow laser beams from the hilt on either ends of the main blade. It is also able to generate a transparent blue energy shield from the two blades on its left arm for defense and shoot light blue beams from the speakers on its legs that ensnare its foes inside an energy cage. After trapping the Gigadrone(s), they would finish them off with the Beast-X Hyper Strike finisher where the Megazord's blade is able to charge up with Morph-X to issue a final slash attack, destroying the enemy. The Beast-X Megazord also uses a second finisher called the Beast-X Hyper Kick where the Megazord jumps into the air and charges its left foot with Morph-X to kick its enemy, destroying it.

After the utter devastation of the Zords by Slicerdrone, a fight that they only won by stabbing it in the head, Grid Battleforce realized that they needed a more powerful Zord to combat the Gigadrones which were getting progressively stronger. To this end, they reconfigured the Zords to combine into the Beast-X Megazord using data from the captured Gigadrone and tried to train the Rangers but every similation ended in the Zords being destroyed. Luckily, they installed shields which eliminated this problem.

The Beast-X Megazord was needed to form for the first time after Slicerdrone escaped General Burke's hangar and helped fight the Rangers alongside Meltadrone. It easily blocked the two's missiles and acid mist with it's Energy Shield, trapped them in it's energy cage, and destroyed them with the Beast-X Hyper Strike.

The Beast-X Megazord was needed again after Scrozzle sent two Gigatronics to Coral Harbor alongside Raildrone. They formed it after taking a beating from the Gigatronics' blasters and destroyed them with the Beast-X Blade Blast before trapping Raildrone and finishing it off with the Hyper Strike.

The Beast-X Megazord finished off Vacuudrone with the Hyper Strike after the Wheeler Zord clogged up it's vacuum arm with its Rocket Storm's bananas.

They later formed the Megazord in the battle against Drilldrone who was hiding underground and bombarding them with lasers. Upon forming it, the Gigadrone came back around for another barrage but they blocked it with the Energy Shield, trapped the Gigadrone in the energy cage, and finished it off with the Hyper Strike.

In the following episode, they formed the Beast-X Megazord to fight Tooldrone and it's Delta Model alongside the Jet Zord and Wrecker Zord Battle Mode. It took on the Delta Model but was easily overwhelmed until Nate and Steel formed the Striker Megazord for the first time and overpowered Tooldrone which enabled the Rangers to knock the Gigadrones into each other. The Beast-X Megazord then finished the Delta Model with the Beast-X Hyper Kick as the Striker Megazord's Strker Hyper Blast finished Tooldrone.

TV STORY-Tools of the Betrayed

One episode later, it was formed to destroy Clonedrone with the Beast-X Hyper Strike.

After the Racer Zord destroyed Tubatron's horn, the Beast-X Megazord finished it with the Hyper Strike.

After the death of Vargoyle, an unnamed Gigadrone was deployed by Scrozzle to fulfil an unspecified purpose. The Racer Zord, Chopper Zord, and Wheeler Zord deployed and formed the Beast-X Megazord once it arrived. The Gigadrone opened fire on the Megazord but it was barely shaken and disarmed it with an energy slash. It then trapped the Gigadrone in the energy cage before taking it out with the Hyper Strike.

After Devon was trapped in the Cyber Dimension, Commander Shaw revealed that there was a way to enter the villain's base but the amount of Gigadrones made it much too dangerous. Luckily, the scientists at Grid Battleforce had found a way for the Striker Megazord and Beast-X Megazordto combine into a new Megazord, the Beast-X Ultrazord. The formation destroyed an army of Gigadrones that confronted it on arrival but was torn apart when Evox entered his new physical form and blasted it. However, by Halloween, the Zords had been rebuilt.

After the destruction of Infernodrone and the supposed death of Scrozzle at the hands of the Racer Zord, the threat of Evox's army was supposedly eliminated forever so the Megazord went unused for several months.

After it was discovered that Scrozzle had survived, and that Evox had survived, the Zords were reinstated and its components destroyed Drilldrone 2.0 and its Gigatronics with the help of the Striker Zords.

After several episodes where only the Ultrazord was used, the Beast-X Megazord was formed once again after the Chopper Zord saved the Wheeler Zord from Controladrone's control. Devon called for his Cheetah Beast Blaster and the Hyper Strike destroyed Controladrone whilst the Striker Megazord took out Digidrone.

A long time later, after the death of Ryjack and the reemergence of Snide thanks to Blaze and Roxy, a new unnamed Gigadrone was deployed and began stealing Morph-X from a tower in Sector Bravo 36. The Rangers formed thier Megazord whilst Nate changed the Wrecker Zord Battle Mode and took it on. The Megazord easily threw down the Gigadrone and a combination of the Hyper Strike and Wrecker Zord Bazooka Blast took it out.

When piloted from base, it can be deployed via its own lift, either in Battle Mode or in Linked Mode.

Wheeler Zord is the mecha for Beast Morphers Blue. Wheeler Zord forms the chest and feet of Beast-X Megazord. It has two modes: Linked Mode and Gorilla Mode. 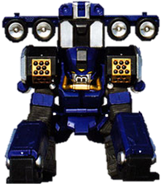 Chopper Zord is the mecha for Beast Morphers Yellow. Chopper Zord forms the arms and mask of Beast-X Megazord. It has two modes: Linked Mode and Jackrabbit Mode. 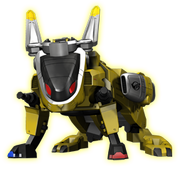 23,000,000
The Beast-X Ultrazord is the combined Megazord form of the Beast-X Megazord and the Striker Megazord. The most powerful Zord in the Beast Morphers arsenal at the time of its debut, it took on and destroyed an entire army of Gigadrones of various models without any issues. It utilizes a massive lance in combat. Instead of walking like their other Megazords, this one slides along on its feet, the bottom of which also have rocket boosters.

This Megazord has a special attack known as the Ultra Blast where it charges up the Chopper Zord rotors and fires forth a devastating blue beam from its chest. When used for the first time in the episode "Game On!'" this was strong enough to blast Gamerdrone back with enough force to make it release its lance.

The finisher for this combination is the Beast X Ultra Strike where the Megazord channels Morph X into its lance like weapon, creating a massive green energy drill, before using it to bore into their enemies. This was powerful enough to destroy an entire army of Gigadrones in one attack.

In the episode "Save Our Shores" however, this attack merely manifested as an energized tip of the Ultrazord's lance which they used to slash Trapperdrone into oblivion.