"I don't care what kind of shield they have. I, the mighty Kekkaibo, will make quick work out of it!"
―Barrier Ninja Kekkaibo's first words upon arriving on Earth with some Genin Magerappa[src]

"You worms will pay!"
―Barrier Ninja Kekkaibo when confronted by the Hurricangers after being unceremoniously dropped by Yousuke and his final words before his death.[src]

Barrier Ninja Kekkaibo (結界忍者ケッカイ坊, Kekkai Ninja Kekkaibō , 1, Movie) is a mantis-themed member of Chuuzubo's Ninja Corps. He is touted as the universe's expert in barrier-breaking.

Barrier Ninja Kekkaaibo was the Hurricanegers' first opponent. A Mantis Chunin, his talent of destroying barriers allowed him to remove the force-fields around the Hayate and Ikazuchi Academies so the Jakanja forces can destroy the students of both schools. He can also pull his opponents into an illusionary world and create an illusion of his head that fires bolts. He was ultimately killed by the Dry Gadget.

Revived in the Movie and was killed again, this time by the Triple Gadget. 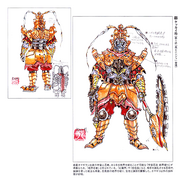