The Barbaric Brothers are two siblings monsters in Mighty Morphin Alien Rangers who serve as the main antagonists of the episode "The Alien Trap."

Lord Zedd sent Erik and Merrick to pour purple liquid into Angel Grove lake to poison the Alien Rangers. The plan from then on was either that they would die which would leave the Earth defenceless (since the Ninja Power Coins were destroyed, Zordon couldn't just give other humans the Ranger powers) or they would have to return to Aquitar and Zedd could take over whilst they were gone. Although never stated, the reason that they sent monsters instead of the Tengas was probably to ensure that they could defend themselves should the Alien Rangers morph. Merrick was first seen depositing the waste into the lake and Erik debuted when he and his brother confronted the former Rangers. Even though their mission was complete, they stuck around to ensure they died but the Alien Rangers eventually broke free thanks to BIlly. Once they had escaped, the Brothers left to attack Angel Grove so the Rangers morphed to fight the duo but the duo were then enlarged so they summoned the Battle Borgs. The duo summoned strange alien armor and took on the Battle Borgs, overpowering and crippling four of them and Erik grabbing the Red Battle Borg. Merrick tried to drill it into oblivion but Aurico broke it free with the Battle Borg Spin. They then summoned the Shogunzords to form the Shogun Megazord. The duo charged at it bravely but were killed by the Fire Saber, both hugging one another before falling right on their sides and exploding.

The brothers talk like stereotypical "surfer dudes", often peppering their dialogue with corny phrases like "awesome" and "radical". They are serious fighters regardless, being able to overpower the Battle Borgs and very nearly destroy them. 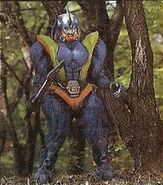 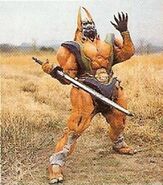