"You! Love that refrigerator!"
―Bara Printer's first words when telling a Japanese lady to fall in love with her appliance.[src]

Bara Printer is a Machine Beast known as the Baronoian Matchmaker as he can scan an image of an object and use it to make people fall in love with it. Hysteria summoned Bara Printer to use his beam to cause his human victims to fall in love over their appliances as a plan to end the human race. But when the Ohrangers interfere, Hysteria sends Acha to have Bara Printer use his power to make humans fall for Baranoia and have them do their dirty work. However, Shouhei tricks Acha into having Bara Printer fall under his own influence and fall in love with the footman before Kocha snaps the Machine Beast out of it. He was overpowered by the Bursting Mirage Knuckles and the Square Crushers' Lightning: Super-Power Crusher before being defeated by Goro in the Giant Roller, Bara Printer is enlarged and takes on Ohranger Robo. Although he initially had the upper hand with spiked projectiles and an eye blast, they overpower him with the Horn Head configuration and it's Taurus Thunder before he is scrapped by the Crown Final Crash.

A second Bara Printer was built to take part in Baranoia's "Magma Enhancement" project, but was destroyed due to the Ohranger's "Trojan Horse" tactic with the Blocker Robo.

He was voiced by Fumihiko Tachiki in his only Super Sentai role so far. 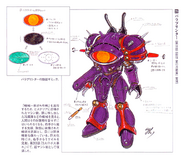 Retrieved from "https://powerrangers.fandom.com/wiki/Bara_Printer?oldid=1001226"
Community content is available under CC-BY-SA unless otherwise noted.